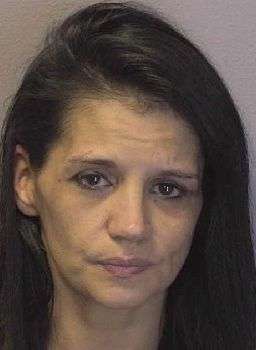 39-year-old Daphne Regina Kistler of 21st Street S.W. in Hickory was arrested by Hickory Police early Monday morning (September 21) on one felony count each of trafficking in methamphetamine and maintaining a vehicle, dwelling, or place for a controlled substance. She was also served with an outstanding warrant for felony obtaining property by false pretenses.

The false pretenses charge stems from an incident on July 27 when a victim reported the use of his personal information to open various credit card accounts. After reviewing information from the case, Kistler was identified as the suspect and a warrant for her arrest was issued. According to H.P.D.’s arrest report, Kistler was in possession of 156 grams of meth at the time of her arrest Monday.

Kistler was taken into custody without incident at about 2 a.m. yesterday at a hotel on 13th Avenue Drive N.W. in Hickory. She was jailed in the Catawba Co. Detention Facility under a $10,000 secured bond, plus a $5,000 unsecured bond on the false pretenses charge. She was not listed as an inmate as of Tuesday morning. A first appearance in District Court was scheduled yesterday in Newton.

Several suspects are being sought by authorities in Iredell County. 29-year-old Patricia Yates is on…