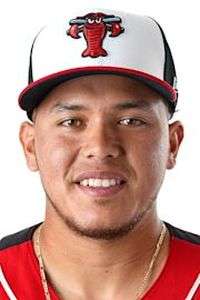 Frainyer Chavez led the Crawdads with two hits, a run scored and an RBI.
photo courtesy of milb.com

The Hickory Crawdads scored eight runs in the top of the ninth to come from behind and win 9-5 over the Rome Braves on the road Saturday night.

Prior to the ninth inning, Hickory scored only one run in the fifth inning. The Crawdads had back-to-back walks issued to Chris Seise and Cristian Inoa. Randy Florentino was called out after a sacrifice bunt moved everyone a base. Jayce Easley then hit a sacrifice fly to left field, allowing Seise to score.

Rome would score single runs in the first, third and seventh inning to lead 3-1 heading into the top of the ninth.

After the Braves made a pitching change in between innings, Angel Aponte singled for Hickory to start the ninth. Frainyer Chavez singled, moving Aponte to second. Seise was then walked loading the bases. A wild pitch then allowed Aponte to score, moving everyone up a base. Inoa was walked, loading the bases again. Florention singled to right field, allowing Chavez and Seise to score, while Inoa went to third and Florentino took second on a fielding error by the right fielder. With that, Hickory took their first lead of the game at 4-3.

However, the Crawdads were not done in the inning. After a Rome pitching substitution, Easley was walked on four straight pitches, loading the bases for the third time in the inning. Jake Guenther replaced Inoa on third base as a pinch runner. After the first out of the inning was issued on a strikeout, Aaron Zavala doubled to right field, scoring Guenther and Florentino. Easley moved to third. Evan Carter then tripled, clearing the bases and after a pop out for the second out of the inning, Chavez singled, allowing Carter to score for a Hickory 9-3 lead.

The Braves did score two runs in the bottom of the ninth, but Hickory took the 9-5 win.

Chavez led the Crawdads with two hits, a run scored and an RBI.

Five Crawdad pitchers combined for 11 strikeouts of Rome batters. Destin Dotson was credited with the win by pitching the eighth inning and striking out one batter. He threw 19 pitches, with 11 being called for strikes.

Hickory is 2-0 on the second half of the season and 40-28 overall. The Crawdads wrap up the series with the Braves in Rome on Sunday.