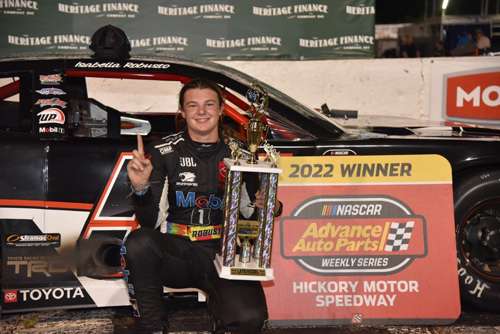 The Hickory Motor Speedway regular season would come to a close on Saturday in spectacular fashion in front of a huge throng of attendees at Championship Night presented by Catawba County United Way.

The Heritage Finance Street Stocks would hit the famed 3/8 mile oval next for their 30 lap track points finale. Jesse Clark would turn the top time in time trials and start from the point with Kevin Eby in the #03 to his outside. Johnny Reynolds in the #73 and Derek Fowler in the #5x would roll off from row two. Clark would pull to the early lead with Eby facing pressure from Fowler for second. Eby would stay glued to the bottom line, with Fowler trying to get around. The halfway point would see Clark, Eby, Fowler, Reynolds, and Jeff Allen in the #22 as the top five. Allen would pressure Reynolds for fifth as they would go door to door for several laps. Clark would prove too strong and drive on to the win. Eby would finish 2nd and Fowler would take 3rd. Allen would grab 4th and Reynolds would come home in 5th. After completing tech Jon Austin would take the Heritage Finance Street Stock Championship.

The Paramount Auto Group Limited Late Models would roll off next for 50 laps in the final round of the Paramount Kia ’BIG 10’ Chase for the Championship. Michael Bumgarner in the #97 would take the pole position in qualifying while William Aldred in the #9 would start to his outside. Kyle Mansch in the #17 and Bryson Ruff in the #24 would qualify in row two. Bumgarner would drive to the early lead with Aldred close behind. Mansch would face a challenge for third from the #22 of Max Price. Price would take the position, but Mansch would retake third a few laps later. Bumgarner, Aldred, Mansch, Price, and the #66 of Zack Wells would make up the top five at the halfway point. Kevin Dill in the #7 and Christopher Martin Jr in the #12 would have a spirited battle for third until Dill would suffer mechanical issues and head to pit road. Bumgarner would drive on to take the win. Aldred would finish 2nd and Mansch would take 3rd. Price would grab 4th and Wells would come home in 5th. After completing tech Michael Bumgarner would secure the Paramount Auto Group Limited Championship and The Paramount Kia “Big 10” Chase for the Championship.

The NASCAR Advance Auto Parts Weekly Series Late Models would roll off next to settle their first ever playoff format track championship with a 75 lap feature. Isabella Robusto in the #55 would best the field in time trials and start from the pole position with Landon Huffman in the #75 to her outside. Matthew Gould in the #27 and Trey Mills in the #1 would make up row two for the start. Robusto would nose ahead for the early as the top four would quickly go single file. Mills would challenge Gould for third during the early laps. Taylor Satterfield in the #40 would look to mix it up with the duo as well. As the battle for third would rage Huffman would pull inside Robusto in his bid for the top spot. Robusto would hang on to the lead as Huffman would try repeatedly to make the move over the first half of the race. Annabeth Barnes-Crum in the #12 would look to get to the front to battle for the championship, however she would first have to deal with Akinori Ogata in the #14. Both cars would be equally matched as neither could get a clear advantage for the sixth position. The halfway point would see Robusto, Huffman, Mills, Satterfield, and Gould as the top five. Lap 43 would see Satterfield move around Mills and into the top three. Ogata would move to Satterfield’s bumper to challenge for third with only fifteen laps to go. As they would battle side by side contact between the two would see Ogata spin and the caution fly on lap 69. With just 6 laps to go the NASCAR Advance Auto Parts Weekly Series Hickory Motor Speedway Track Championship would still be up for grabs, with all three Championship contenders in the top four positions on the restart. Robusto and Huffman, Gould and Barnes would bring the field back to the restart for the win and and the 2022 track championship. The restart would see Robusto move to the lead ahead of Huffman, as Barnes-Crum would work her way into third, putting the three championship contenders in the top three positions. Robusto would drive on to take the win. Huffman would finish 2nd and Barnes-Crum would grab 3rd. Satterfield would grab 4th and Gould would come home in 5th.

Finishing out the night’s racing action would be the Renegades for their 20 lap season finale. Charlie Neill in the #51 would start from the top spot with Danny Crump Jr in the #97 to his outside. Zachary Mullins in the #72 and Brandon Hasson in the #82 would roll off in row two. Neill would jump to the early lead with Mullins moving up to second. David Hasson in the #83 would move around Mullins for second and bring Justin Austin in the #1 with him to third. Brandon Hasson would drive up to Austin’s bumper in his bid for position. Crump would spin in turn two on lap 13, bringing out the caution. Neill and David Hasson would lead the field to the restart. Neill would back to the lead and drive on to the win. David Hasson would finish 2nd with Austin grabbing 3rd. Brandon Hasson would take 4th while Mullins would come home in 5th. After completing tech Charlie Neill would secure the Renegades Championship.

Four Cylinder Champions would be Brian Mundy and Tim Canipe.

Next week America’s Most Famous Short Track will be silent, but will roar back to life with a vengeance on October 1st with a visit from the fan favorite Tour of Destruction.

The Annual Championship Banquet will be December 3rd at the Newton Expo Center.