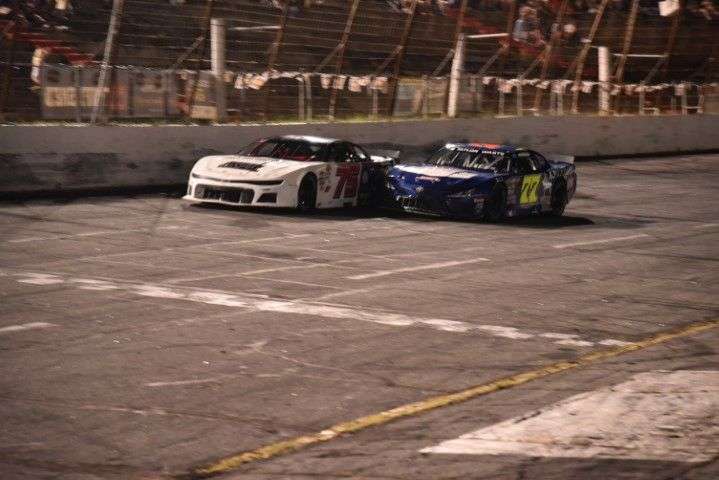 The NASCAR Advance Auto Parts Weekly Series returned to action on Saturday with the running of Coca-Cola Night at the Races.

Leading off the night’s action would be the Heritage Finance Street Stocks for 30 laps. Gary Ledbetter in the #32 would set fast time and start from the pole position with Greg Wise in the #99 to his outside. Row two would see Joseph Hodges in the #1 and Jon Austin in the #9 side by side for the start. Ledbetter would move to the early lead as Wise would feel pressure from Hodges for second. Austin would pull to Hodges rear bumper as the battle for second would be between the three cars. Wise would narrow the gap on Ledbetter in his attempt to catch the leader. Hodges and Austin would have a spirited battle for third. Austin would move to the inside of Hodges and give battle for the last ten laps. Ledbetter would drive on to take the win. Wise would finish 2nd, Austin would take 3rd, and Hodges would come home in 4th.

Next up would be the Paramount Auto Group Limited Late Models for 50 laps in the Paramount Kia ‘BIG 10’ Chase for the Championship. Christopher Martin Jr in the #12 would pace time trials and start from the point with Michael Bumgarner in the #97 to his outside. Max Price in the #22 and Zack Wells in the #66 would make up row two for the start. The leaders would battle door to door for the top spot as the #25 of Graham Hollar and the #30 of Jordan McGregor would make contact resulting in a hard crash into the turn one wall. Both drivers would be uninjured, but neither would be able to continue due to damage from the crash. The restart would see Martin and Bumgarner door to door. Bumgarner would use the high line to move to the lead. Price and Wells would also challenge Martin for position and move to second and third. Price would drive to Bumgarner’s rear bumper and give battle for the top spot. The lead duo would battle door to door until lap 10 when Price would clear Bumgarner for the lead. The halfway point would see Price, Bumgarner, Wells, Kevin Dill in the #7, and Reilly Doyle in the #23 as the top five. Lap 35 would see Bumgarner move around Price for the lead, but the battle was far from over. The two would swap the position and battle door to door until lap 46 when they would encounter a lap car entering turn one and contact would send Price spinning into the wall. The #51 of Garrett Freeman would also be collected in the incident. Price’s night would be done, Freeman would rejoin the field. The restart would see Bumgarner and Wells bring the field to the green flag. Bumgarner would pull to the lead and drive on to take the win. Wells would finish 2nd with Dill taking 3rd. Doyle would grab 4th and Billy Smith in the #98 would finish 5th.

The NASCAR Advance Auto Parts Weekly Series Late Models would be up next for 75 laps in their regular season finale before starting their playoff run on Saturday night, August 13th. Rain would cancel qualifying and set the starting order by points. Landon Huffman in the #75 and Annabeth Barnes-Crum in the #12 would make up row one for the start. Row two would see Skyler Chaney in the #17 and Charlie Watson in the #9 side by side to begin the race. Huffman and Barnes-Crum would battle door to door as a chain reaction accident in turn two would collect multiple cars, including: Chaney, Watson, Isabella Robusto in the #55, Katie Hettinger in the #71, Bryson Dennis in the #15, Chase Dixon in the #51, Pat Rachels in the #34, and Trey Mills in the #1. The restart would see Huffman and Barnes-Crum bring the field back to the green flag. The battle for the lead would last several laps, but Huffman would nose ahead with Barnes-Crum glued to his rear bumper. Bryson Ruff in the #24 would move around Barnes-Crum for second. After passing Barnes-Crum, Connor Hall in the #77 would drive up to third on lap 10 and look to run down the leaders. Hall would get by Ruff for second on lap 14. Mitch Walker in the #3 would move up to fourth by lap 15. Lap 25 would see Huffman, Hall, Walker, Ruff, and the #88 of Doug Barnes as the top five. The caution would fly on lap 35 with a spin in turn four by the #93 of Jason Miles. The restart would see Huffman and Hall go door to door for the green flag. After several hard fought laps Hall would move around Huffman for the top spot on lap 41. Hall would prove too strong on the night and drive on to the win. Walker would finish 2nd and Huffman would take 3rd. Doug Barnes would finish 4th and Ruff would come home in 5th.

The Carolina Pro Late Models would close out the night’s racing action with their 100 lap feature. Rain would cancel their qualifying and the starting order would be determined by a random draw. The front row would be made up of Caleb Costner in the #95 and Kyle Campbell in the #03. Row two would see TJ De Caire in the #88 and Jonny Kay in the #74. Campbell would take the early lead with De Caire facing a challenge from Kay. Kay would make the pass on De Caire for second and bring Caden Kvapil in the #35 with him to third. Kvapil would make the pass for second and bring the #75 of Toby Grynewicz to third. The caution would fly as the #5 of Jasec Holladay would roll to a stop on the backstretch. Campbell and Kvapil would bring the field back to the green flag. Kvapil would use the high line to pull to the lead. The halfway point would see Kvapil, Grynewicz, Josh Lowder in the #63, Campbell, and the #4 of Sean Abel as the top five. Grynewicz would drive up to Kvapil’s rear bumper and give challenge for the top spot. Lowder would move around Grynewicz for second and look to run down Kvapil for the lead. Lap 95 would see the caution fly as Kvapil and Lowder would spin coming off turn two. Race control would determine both cars had spun after the caution had been displayed for another incident and allow them to maintain their positions for the restart. Kvapil would pull ahead at the restart and drive on to the win. Lowder would finish 2nd with Abel setting for 3rd. Mikey Toner Jr in the #1X would grab 4th and Gavin Boschele in the #5 would round out the top five.