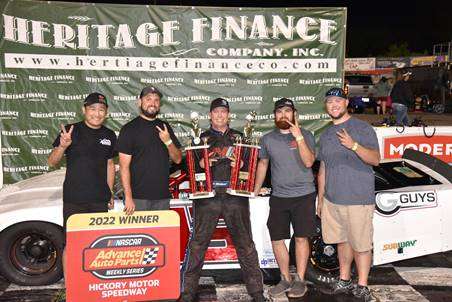 The NASCAR Advance Auto Parts Weekly Series Late Models would be first up with race one of Twin 40 lap features. Mitch Walker in the #15 would top qualifying and start from the pole position with Charlie Watson in the #9 to his outside. Landon Huffman in the #75 and Chase Dixon in the #07 would make up row two for the green flag. Watson would use the high groove to take the early lead as the field would come off of turn two with Walker facing challenges for second from Dixon and Huffman. Walker would take the second position with Dixon and Huffman battling for third. Huffman would take the position and give chase to Watson and Walker for the top spot. The caution would fly on lap 19 as the #55 of Isabella Robusto would spin while battling Jeff Sparks in the #7 for the fifth position. The restart would see Watson and Walker door to door for the green flag. Lap 22 would see Walker make the move around Watson for the top spot. Watson would then face a challenge from Huffman for second. After running several side by side laps Watson would nose back ahead for the spot. Walker would drive on to take the win, his first Late Model victory at Hickory Motor Speedway. Watson would take 2nd with Huffman finishing 3rd. Dixon would finish 4th and Robusto would battle back to take 5th.

Next up would be the Heritage Finance Street Stocks for their 30 lap feature. Rick Hale in the #7 would set fast time in qualifying to take the top spot with DJ Little in the #11 to his outside. Jeff Byers in the #64 Jon Austin in the #9 would roll off in row two. Hale would have mechanical issues before the green flag and pull to pit road for repairs. Little and Byers would take the green flag from row one. Little would pull to the early lead with Byers giving chase. Lap 16 would see the leader, Little, spin as he had smoke trailing for several laps prior to the spin. Byers and Hale would lead the field to the green flag. Byers would pull to the lead with Hale and Austin pressuring for the top spot. Byers would drive on to the win. Austin would move up to finish 2nd, Hale would take 3rd, and Little would come home in 4th.

50 laps in Round #5 of the Paramount Kia “BIG 10” Racing Challenge for the Paramount Auto Group Limited Late Models would be up next. Akinori Ogata in the #14 would top qualifying and start from the pole position with Christopher Martin Jr in the #12 to his outside. Michael Bumgarner in the #97 and Max Price in the #22 would make up row two for the start. Ogata would pull to the early lead with Martin facing a challenge from Bumgarner. Martin would hold the spot as Bumgarner would see Price pressure him for position. Price would take the third position as Chase Janes in the #47 would look to move around Bumgarner for fourth. Janes would make the pass on Bumgarner and take the spot. The #71 of Blake McCandless would look to make the battle for fourth a three car skirmish as he pulled to the bumpers of Bumgarner and Janes. Ogata would prove too strong on the night and drive on to the win. Martin would grab 2nd with Price taking 3rd. Janes would finish 4th and Bumgarner would come home in 5th.

Rolling off next would be the Super Trucks for 35 laps of racing action. Ricky Dennie in the #6 would take the pole with Duane Cook in the #17 to his outside. Row two would be made up of Joey Shuryan in the #30 and Baron Kuritzky in the #21 for the green flag. Dennie would pull to the early lead with Cook giving chase. The caution would fly on lap 24 as the #91 of Keith Norville would spin in turn three. The restart would see Dennie and Cook side by side for the start. Dennie would pull to the lead while Cook would face pressure from Shuryan for second. Dennie would drive on to the win. Cook would finish 2nd and Shuryan would take 3rd. Kuritzky would grab 4th and Norville would come home in 5th.

The 4 Cylinders would roll off next for their 25 lap feature. Robert Trivette in the #11 would start from the pole position with Brian Mundy in the #6 to his outside. Curtis Pardue in the #17 and the #1 of Tim Canipe would make up row two for the green flag. Trivette would pull to the lead with Mundy giving chase. The caution would fly on lap 1 when Pardue would spin. The restart would see Trivette and Mundy side by side for the start. Trivette would once again drive back to the lead with Mundy giving chase. The leaders would set a blistering pace with barely a car length separating them from the start of the race to the end, but Trivette would hang on and take the win. Mundy would settle for 2nd, Pardue would take 3rd, and Canipe would finish 4th.

The NASCAR Advance Auto Parts Weekly Series Late Models would close out the night’s racing action with race two of their Twin 40 lap features. After the 8 car invert from the finishing order from race one Annabeth Barnes-Crum in the #12 and Jeff Sparks in the #7 would make up the first row for the start. Pat Rachels in the #34 and Isabella Robusto in the #55 would fill row two for the green flag. Barnes-Crum would pull to the lead while Sparks would face pressure from Robusto for second. Landon Huffman in the #75 and Mitch Walker in the #15 would both work their way up into the top five by lap 5. Robusto would clear Sparks for second, as Sparks would face a challenge for third from Huffman. Huffman would make the pass for third and bring Walker with him to fourth. Robusto would look to the inside of Barnes-Crum in the battle for the top spot. After seven side by side laps Barnes-Crum would pull back to the top spot with Robusto seeing Walker looking to take second from her. Walker would make the pass and set sail for the leader, Barnes-Crum. Lap 24 would see Walker make the move around Barnes-Crum for the lead. Walker would drive on to take the win, sweeping the Twin 40 lap features. Barnes-Crum and Robusto would have a great ten lap battle for second over the closing laps with Barnes-Crum taking 2nd and Robusto finishing 3rd. Huffman and Charlie Watson in the #9 would go door over the final ten laps with Huffman finishing 4th and Watson taking 5th.

This Saturday Night June 11th, Hickory Motor Speedway brings you The Inaugural Jack Ingram Memorial race featuring the best NASCAR Advance Auto Parts Weekly Series Late Models for 111 laps of racing action to Honor NASCAR Hall of Famer Jack Ingram. Gates will open at 4 with racing at 7:15 with Fireworks following the event. Tickets are $18.00 for adults $16.00 for Seniors Teens and Military and Kids 12 and under get in free.