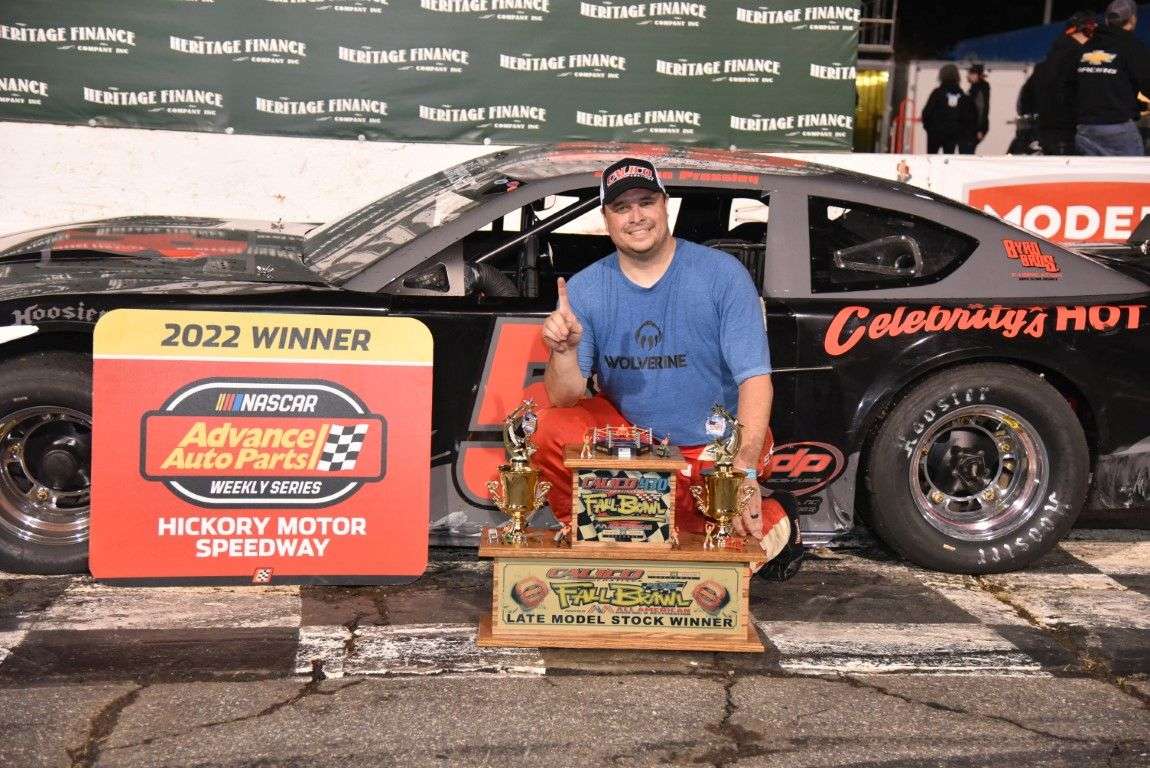 The 2022 Hickory Motor Speedway racing season would come to a power packed close on Saturday with the running of the Calico Coatings Fall Brawl presented by All American Roofing and Restoration.

Leading off the night’s festivities would be the Heritage Finance Street Stocks for their 30 lap feature. Jesse Clark in the #5 would pace qualifying and start from the top spot with Cody DeMarmels in the #12 starting to his outside. Gary Ledbetter in the #32 and Landon Huffman in the #00 would make up row two. The green flag would see Jesse Clark, DeMarmels, and Ledbetter look to go three wide on the backstretch, but a spin by Garth Clark in the #4 would bring out the early caution. Clark and DeMarmels would bring the field back to the restart. Clark would pull to the lead with DeMarmels facing a challenge from Ledbetter. Ledbetter would make the pass on DeMarmels and look to catch the leader. Lap 6 would see Ledbetter make the pass for the lead with DeMarmels challenging Clark for second. DeMarmels would make the pass and begin to chase down the leader. Clark would move back around DeMarmels for second on lap 15 in his bid to take back to the top spot. Ledbetter would prove too strong as he would drive on to take the win. Clark would finish 2nd with DeMarmels taking 3rd. Huffman would grab 4th and Marshall Sutton in the #64 would come home in 5th in his first race of 2022 after a year filled with serious health challenges.

The Paramount Auto Group Limited Late Models would roll off next for their 100 laps of Fall Brawl action. 2022 Hickory Motor Speedway Track Champion Michael Bumgarner in the #97 would start from the point position with Ross ‘Boo Boo’ Dalton in the #1 starting to his outside. Bryce Applegate in the #5 and Clint Fields in the #16 would make up row two for the green flag. Bumgarner would nose ahead as he completed lap 1 with Dalton close behind. Mark Johnson in the #13 would move to fourth around Fields on lap 8. The caution would fly on lap 13 as the #51 of Allen Huffman would have an engine let go. The restart would see Bumgarner and Dalton door to door. Bumgarner would move back to the lead with Dalton in his tracks. Johnson would look to get around Applegate on the high side, but after several laps he would settle in behind him for fourth. Lap 20 would see the caution fly as Chris Huffman in the #51 would spin in turn three. Bumgarner and Dalton would pace the field back to the green flag. Bumgarner would pull back to the top spot once again. Tristan McKee in the #7 would move to fourth around Johnson on lap 29. The caution would fly once again on lap 31 with a two car incident in turn one involving Graham Hollar in the #25 and Bub Haney in the #28. The restart would see Bumgarner and Dalton bring the field back to the green flag. Bumgarner would move to the lead with Dalton close behind. McKee would move around Applegate to third. The halfway point would see Bumgarner, Dalton, McKee, Applegate, and Brandon Lynn in the #17 as the top five. Lap 55 would see Lynn move to fourth and drop Applegate back to fifth. Lynn would pull to the pits on lap 80 with engine issues, ending a strong run through the field. Bumgarner would drive on to take the win. Dalton would finish 2nd and McKee would grab 3rd. Applegate would take 4th and William Aldred in the #9 would come home with a top five in 5th.

The Carolina Pro Late Models would finish out the night’s action with their 100 lap feature. Kyle Campbell in the #03 would start from the top spot with Max Reaves in the #4 to his outside. Row two would see Brett Suggs in the #15 and Caden Kvapil in the #35 side by side for the start. Campbell would lead the first lap with Reaves close behind. Suggs and Kvapil would stay door to door for several laps until Kvapil would move up to third on lap 5. The caution would fly on lap 12 as Reaves would spin on the front stretch. Campbell and Kvapil would bring the field back to the green flag. Kvapil would move to the lead as Suggs would pressure Campbell for second. The caution would fly as the #15 of Austin Huehl and the #37 of Travis Brown would spin in turn three. The restart would see Kvapil and Suggs pace the field back to the green flag. Kvapil would pull to the lead as Campbell would face a challenge from the #63 of Josh Lowder. The halfway point would see Kvapil, Suggs, Lowder, Campbell, and Mikey Toner Jr in the #1X as the top five. Kvapil would drive on to take the win. Lowder would finish 2nd but take the 2022 Carolina Pro Late Model Series Championship while Campbell would take 3rd. Suggs would grab 4th and Caleb Johnson in the #1 would come home in 5th.