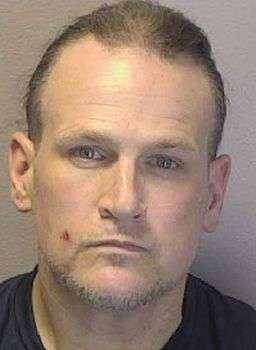 50-year-old Frank Rosenbaum III of 23rd Street Drive N.E. in Hickory was arrested by Hickory Police early this morning (August 10) on a number of outstanding warrants. He faces charges for possession of stolen goods or property, unauthorized use of a motor vehicle, fleeing to elude arrest with a motor vehicle, and assault with a deadly weapon on a government official. Rosenbaum was also charged with failure to appear on charges of fleeing to elude arrest with a motor vehicle with three aggravating factors, careless & reckless driving, resisting a public officer, fail to stop for a steady red light, speeding, and unauthorized use of a motor vehicle. In addition, he was charged with five felony probation violations, two out-of-county probation violations, and two misdemeanor probation violations. Some of the charges are from Alexander County.

One of the charges for speeding to elude arrest, as well as the careless & reckless and resisting charges, are from an incident on July 9. Rosenbaum was initially arrested and charged by Hickory Police at that time.

Rosenbaum is currently listed as an absconder from probation. He’s on probation as he serves a 36-month suspended sentence following an October 2019 conviction in Alexander County for speeding to elude arrest, assault with a deadly weapon on a government official, and D.W.I. level III. Rosenbaum is also serving a 30-month suspended sentence following a December 2019 conviction in Catawba County for possession of a firearm by a felon and possession of a schedule II controlled substance.

Rosenbaum was taken into custody at 4:50 a.m. today at convenience store on 13th Avenue Drive S.E. in Hickory. He was jailed in the Catawba Co. Detention Facility with bond set at $145,000, secured. A Superior Court date is coming up on August 17 in Taylorsville with a District Court appearance scheduled for August 31.