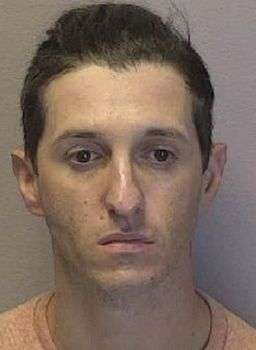 33-year-old Robert Allen Reid of 17th Avenue N.E. in Hickory was arrested by Hickory Police last Friday afternoon (October 2) on felony counts of possession of methamphetamine, forgery of an instrument, uttering a forged instrument (two counts), and attempting to obtain property by false pretenses (two counts). He was also charged with possession of drug paraphernalia.

Reid was arrested in connection to an incident on October 2 when Hickory Police responded to the Skyline National Bank on Highway 127 South in Mountain View. A male subject attempted to pass a fraudulent check. During the arrest, Officers found 0.2 grams of meth and drug paraphernalia.

Reid was also served with outstanding warrants from an incident on September 29. At that time, Hickory Police responded to the State Employee’s Credit Union on Fairgrove Church Road S.E. where suspects reportedly attempted to cash a forged check at the credit union.

Reid was taken into custody without incident at about 2:50 p.m. Friday at the bank in Mountain View. He was jailed in the Catawba Co. Detention Facility with bond set at $53,000, secured. A first appearance in District Court was scheduled yesterday (October 5) in Newton with another court date coming up on October 26.