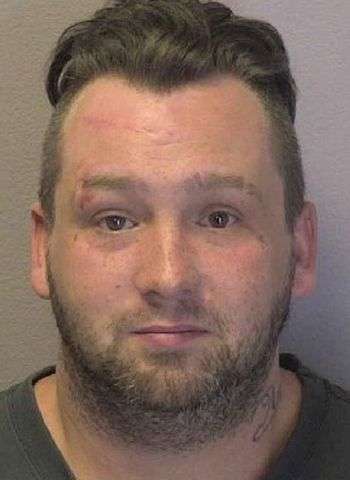 30-year-old Tyler Dean Dula of 20th Avenue Drive N.E. in Hickory was arrested by Hickory Police early Saturday morning (October 17). He was charged with felony counts of hit & run with failure to stop for injury, attempted larceny, breaking & entering a motor vehicle, and larceny of a motor vehicle. Dula also faces two misdemeanor counts of injury to personal property and one misdemeanor count of larceny.

Dula was arrested in connection to a hit & run accident at about 11:35 Friday night (October 16). A 35-year-old Hickory man driving a 2011 Harley Davidson motorcycle was stopped in the northbound lane of 15 Street N.E. at the intersection with Highland Avenue N.E. A 1990 Ford traveling south on 15 Street N.E. came through the intersection, drifted into the northbound lane, hit the motorcycle, and ran over the driver’s left leg. The victim attempted to avoid the oncoming Ford by turning onto Highland Avenue, but was unsuccessful.

The Ford, driven by Tyler Dean Dula, hit the curb, but did not stop and did not slow down, continuing southbound on 15 Street N.E. Two witnesses confirmed the victim’s account of the incident. The motorcycle sustained $5,000 in damages, while the Ford sustained damages estimated at $700. Dula later reportedly admitted that he was unlawfully in possession of the Ford. No update on the victim’s condition is available.

While investigating the accident, Officers took a call regarding a vehicle broken down in the roadway at the intersection of 15th Street S.E. at “F” Avenue S.E. The vehicle had damage matching possible damages from the hit & run. When Officers arrived, Dula was not in the vehicle. He was found at a residence on 15th Street S.E., allegedly attempting to steal a vehicle. Dula fled on foot, but was detained at about 1:20 a.m. Saturday behind a business on “F” Avenue S.E.

Dula was jailed in the Catawba Co. Detention Facility with bond set at $24,500, secured. A first appearance in District Court was scheduled today (October 19) in Newton.

One person was reportedly killed in a Tuesday evening (November 17) wreck in Conover. Catawba…