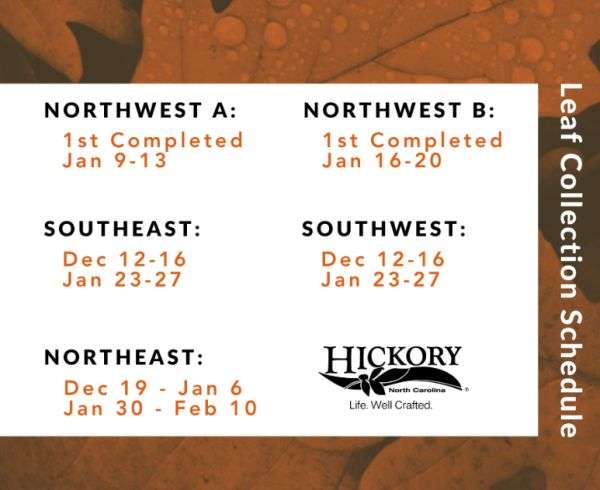 Due to an earlier than expected leaf fall, along with continued staffing challenges, leaf pickup in the City of Hickory has been delayed. The City of Hickory Solid Waste Division appreciates citizens’ patience as Public Works crews continue their efforts to complete the work and provide the highest levels of service.

A revised leaf collection schedule has been created to assist Hickory residents with determining a more accurate pickup timeframe. The first round of leaf pickup for the Northwest A quadrant of the city is completed. The second round will be January 9 through January 13. This quadrant covers the city limits on the west, North Center Street on the east, north of Norfolk Southern Railroad and south of 12th Avenue NW (Geitner Road), 6th Street NW, and 16th Avenue NW.

The first round of the Northwest B quadrant is completed, the second round of pickups will be January 16 through January 20. Northwest B covers all of the city limits north of 12th Avenue NW (Geitner Road), 6th Street NW, 16th Avenue NW, and west of North Center Street.

In the Southeast and Southwest quadrants, the first round of pickups is underway and runs through December 16 and the second round will be January 23 through January 27. Pickups in the Northeast quadrant will occur from December 19 until January 6, and January 30 until February 10. Get more details and also read helpful tips by going to https://www.hickorync.gov/leaf-collection.