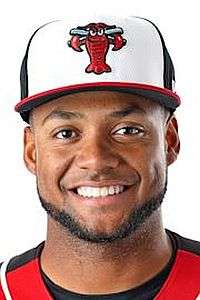 Cristian Inoa had a hit and a run scored.
photo courtesy of milb.com

The Crawdads took their fifth straight game from the Winston-Salem Dash by a score of 8-4 on Saturday night.

The Dash took a 1-0 lead in the first inning, but the Crawdads put together a rally in the home half of the frame to even the score. Alejandro Osuna walked to start things off. Evan Carter singled and took a hard turn around first, getting caught in a rundown. As the Dash were trying to track down Carter, Osuna, who had taken third on the single, slid into home to tie the game.

The Crawdads added two in the second to pull ahead. They loaded the bases on a Cristian Inoa single and walks by Cody Freeman and Randy Florentino. Alejandro Osuna hit a sacrifice fly to the warning track in left for the first run. Frainyer Chavez singled in Freeman to make it 3-1.

The ‘Dads scored twice more in the third. Angel Aponte singled and came around to score on a double by Inoa. Freeman picked up a base hit to bring in Inoa. Florentino struck out but a wild pitch allowed him to reach and sent Freeman to third. Osuna poked a single through the right side of the infield and scored the Crawdads 6th run.

Winston-Salem tacked on two runs in the fifth and one in the seventh but still trailed 6-4.

The Crawdads pushed their lead back to three in the seventh with a run. Florentino drew a one-out walk and took second as Osuna struck out. Jayce Easley hit a soft liner to left that drove in Florentino.

Bradford Webb struck out three of the four batters he faced in the ninth to secure the 8-4 victory.

Sunday, the Crawdads will go for the series sweep at 3pm. It is a Bark in the Park, and a Church Bulletin Sunday.