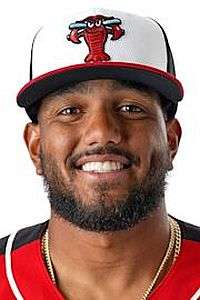 Keyber Rodriguez had a pair of hits and two runs scored.
photo courtesy of milb.com.

The Hickory Crawdads rallied late but fell short to the Hudson Valley Renegades, 5-4 Friday on the road. The Crawdads have lost three straight.

Hudson Valley scored a single run in the first, second and sixth innings with two runs in the fifth to take a commanding 5-0 lead headed into the seventh inning.

The Crawdads got on the board in the seventh inning. Angel Aponte singled to open the inning. Keyber Rodriguez ripped a line drive into center field allowing Aponte to move to second. One out later, a wild pitch moved Aponte to third and Rodriguez to second. Randy Florentino then hit a double scoring Aponte and Rodriguez.

Hickory struck again in the ninth inning. Rodriguez singled to start the inning on the first pitch he saw. Josh Hatcher was walked and both he and Rodriguez advanced a base on a wild pitch. Florentino hit a sac fly to center field, allowing Rodriguez to score. One out later, Alejandro Osuna singled, moving Hatcher to third. Cristian Inoa the lined a double to left field, allowing Hatcher to score, but a groundout ended the threat and the game.

The loss drops Hickory to 24-28 on the second half of the season. They are 62-56 overall on the season. Hickory takes on the Renegades through Sunday.