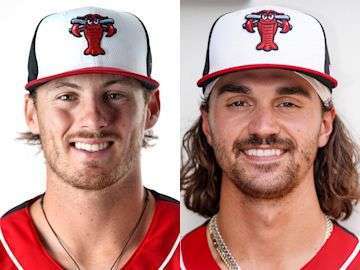 For the second time this season, the Hickory Crawdads tossed a combined no-hitter on Thursday night as they took down the Greenville Drive 4-0.

Mason Englert led the way, pitching the first seven frames. Englert, who tossed seven innings and gave up only two hits in his last start, started off the game by retiring the first 12 batters. He walked the leadoff batter in the fifth, induced a popup and a force out before walking a second hitter. He worked out of the jam by getting the last out of the inning on a flyout to center. Englert responded with a 14 pitch sixth inning, striking out two and getting a grounder to short. He was visibly fired up after striking out the first two batters of the seventh then got the final out of the inning on a groundball to third that third baseman Thomas Saggese flipped over to Cristian Inoa at first. Englert was lifted after throwing 93 pitches and striking out six.

Theo McDowell took over in the eighth inning. He recorded a flyout to left, a strikeout, and a popup to right to retire the side in order. McDowell came back out for the ninth and go the first out on a grounder to short that Frainyer Chavez charged and threw to first in time for the out. McDowell got the next out on a six-pitch swinging strikeout on a blocked ball in the dirt. The Red Sox number one prospect stepped up next and drew Greenville’s third walk of the night, drawing a quick mound visit from Crawdads’ pitching coach Jon Goebel. A high popup to center closed out the game to secure the Crawdads second no-hitter of the season.

McDowell also handled the last two innings of the no-hitter against the Bowling Green Hot Rods on July 10th.

The Crawdads offense got on the board in the third inning, stringing together a rally off a walk. Keyber Rodriguez worked a six pitch walk and stole second to get into scoring position. Jayce Easley drove a fly ball to center, allowing Rodriguez to tag up and take third. A wild pitch scored him and gave the ‘Dads a 1-0 lead.

They added on in the fourth on a double by Alejandro Osuna, another wild pitch, and a sacrifice fly by Chavez.

The bats struck again in the seventh as Evan Carter smacked his tenth homerun of the season.

The Crawdads pushed the lead to four in the ninth inning. Easley walked, stole second and third, and came home on a single by Carter.