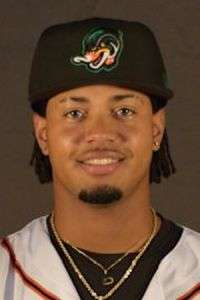 Daniel Mateo had a pair of hits, and was the only Crawdad player to have more than one hit in the contest.
photo courtesy of milb.com.

Hudson Valley scored four runs in the first inning. Hickory wouldn’t get on the board until the third inning. Josh Hatcher started the inning getting walked. Griffin Cheney was walked as well. Daniel Mateo singled, scoring Hatcher and placing Cheney on second. Chris Seise then doubled to score Cheney and move Mateo to third. Cristian Inoa hit a sacrifice fly to center field, allowing Mateo to score. Cody Freeman singled, allowing Seise to score from second base.

In the fourth inning, with one out, Hickory hit back-to-back singles from Randy Florentino and Hatcher. Cheney was then walked to load the bases. Daniel Mateo walked, allowing Florentino to score, as Hickory took their first lead of the day at 5-4.

In the fifth inning, Angel Aponte doubled with one out. Keyber Rodriguez then walked. Florentino hit into a ground out that would allow the runners to advance a base. Hatcher then singled, scoring Aponte and Hickory had a 6-4 lead.

Hudson Valley would tie it in the sixth inning with two runs. In the top of the seventh, Hickory retook the lead. Aponte was walked and would come home on a sac fly by Florentino. But the Renegades scored three runs in the home half of the inning to take the 9-7 win.

The loss drops Hickory to 24-30 on the second half of the season. They are 62-58 overall on the season. Hickory will be off on Monday and travel to Aberdeen to start a six-game series on Tuesday.