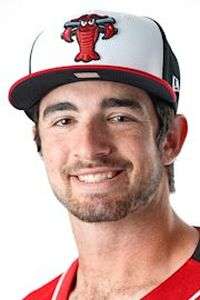 Thomas Saggese had a home run in the ninth inning.
photo courtesy of milb.com

The Hickoy Crawdads hosted their last Friday night of the season in front of a sold-out crowd of 4,683. They made a run in the ninth inning, but ultimately lost to the Rome Braves 5-4.

The Crawdads took a 1-0 lead in the third inning. Evan Carter walked and got into scoring position with a stolen base. Angel Aponte doubled him in for the first run of the game.

Rome tied the game with a sacrifice fly and took a 5-1 lead on a grand slam.

The ‘Dads got a run back in the seventh to cut the deficit to three. Jayce Easley singled, stole second, and moved to third on a single by Griffin Cheney. Carter singled hit a line drive to right to score Easley.

The Crawdads made a run in the ninth inning, as Liam Hicks walked, and Thomas Saggese hit his team-leading fourteenth homer of the season to bring them within a run. Aponte singled for his third hit of the night. Chris Seise hit a groundball to the second baseman, whose foot slipped in the dirt, making the throw late and allowing Aponte and Seise to both be safe. Cody Freeman worked an eight-pitch at bat but a fly ball to right ended the game.