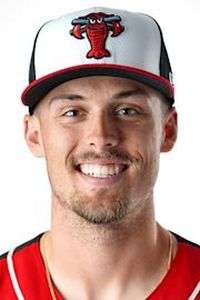 The Hickory Crawdads scored in bunches in defeating the Greenville Drive on the road Friday night, 7-4. Hickory scored three runs in the third inning and four runs in the seventh to take a commanding 7-1 lead heading into the stretch. However, the Drive scored three in the bottom of the ninth for the 7-4 final.

The Crawdads started the scoring in the third inning. With one out, Jayce Easley reached base on a fielding error. He would then steal second and third base. Frainyer Chavez was then walked. Evan Carter would hit a ground rule double, scoring Easley and putting Chavez on to third. Thomas Saggese would hit a sacrifice fly for the second out of the inning, but it would allow Chavez to score and Carter to reach third. Cristian Inoa then hit a single to right field, and Carter scored the final run of the inning.

Greenville would score a run in the bottom of the fifth to cut Hickory’s lead to 3-1.

Hickory would add to their lead in the seventh. Chavez singled to open the inning on a bunt. Carter was then walked. Saggese singled, loading the bases. A wild pitch allowed Chavez to score and move the base runners up one. One out later, Cody Freeman singled, allowing Carter and Saggese to score. Angel Aponte doubled, putting Freeman on third. Chris Seise reached first base on a catchers interference, loading the bases. Konner Piotto then hit a sacrifice fly, scoring Freeman.

Greenville did score three runs off of ‘Dads reliever Yohanse Morel, but Hickory held on for the 7-4 win.