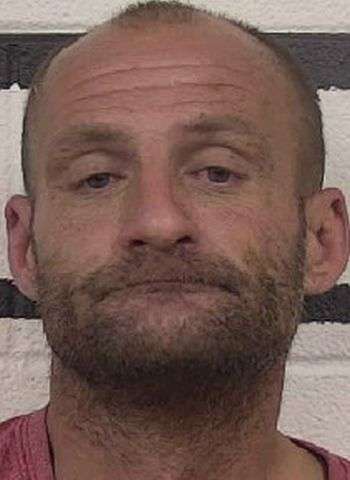 On Sunday a structure fire at 4955 Morrison Place in Granite Falls was reported to the Caldwell County Communications Center. Sawmills Fire Department along with Granite Falls Fire Department were dispatched to the scene and were able bring the fire under control, preventing severe damage. The Caldwell County Fire Marshal determined that the fire was intentionally set.

The home set on fire was a Caldwell County Sheriff’s Office deputy’s residence. Surveillance footage helped authorities identify the suspect as William Junior Sisk. He reportedly approached the front of the home with a large bucket, threw a liquid substance from the bucket onto the front door to the home and walked away. He returned a few moments later and allegedly fire to the front door of the home with a lighter.

According to the Sheriff’s Office, Sisk can be heard making the statements “now you are going to die” and “you had this coming” on the video footage. Sisk lives in a nearby residence. The Deputy’s home was occupied by one individual at the time the fire was set. No one was injured as a result of the fire. Sisk was taken into custody a short distance away and allegedly assaulted two Deputies while in the process of being arrested.

Sisk was transferred to the Catawba County Detention Facility where he was confined due to the fact that the Caldwell County crimes were allegedly committed against an employee of the Caldwell County Sheriff’s Office. He was jailed in Newton under $1,000,000 bond on the felony counts and $7,411 bond on the non-support charges. A court date was scheduled today (March 1) on the felony counts, and Thursday (March 4) on the non-support charges.