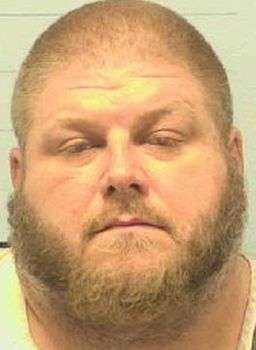 A fugitive from another state was apprehended in Burke County. Thursday (October 1), at approximately 1:00 p.m., Morganton Department of Public Safety officers conducted a traffic stop on a Honda located at The Burke Mission Station on West Union Street in reference to a wanted fugitive from Michigan. The stop was made after receiving information from the U.S. Marshals Carolinas Regional Task Force that the suspect may be at the location.

The wanted man, 40-year-old James Paul Hardin, pulled across the street to the Shop and Save gas station, also on West Union Street, before stopping. At that time he was taken into custody. Hardin was wanted by the Ottawa County Sheriff’s Department in Michigan on a criminal sexual contact warrant. He was taken to the magistrate’s office and served with the felony fugitive warrant.

Hardin was then transported to the Burke County Jail where he was confined without bond. He was awaiting extradition back to Michigan. A District Court appearance is scheduled for next Monday (October 5) in Morganton.

40 new cases of COVID-19 have been confirmed today (October 8) in Catawba County, raising…