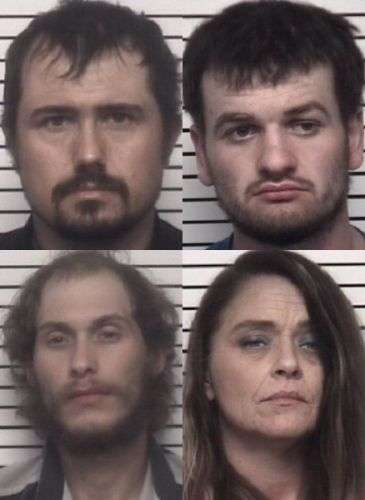 Four people have been arrested by Iredell County Sheriff’s Officers on a variety of felony charges. 36-year-old Jonathan Ray Lowman and 26-year-old Brandon Hugh Bell, both of the same address on Lundy Road in Statesville, and 26-year-old Dakota Ray Ferguson of County Line Road in Harmony, and 47-year-old Marie Cleary Dugger of Hatteras Trail in Hamptonville have all been charged with felony counts of altering or destroying stolen motor vehicle parts (chop-shop activity), possession of stolen property, and conspiracy. Logan and Bell were also charged with felony possession of methamphetamine. In addition, Lowman was charged with felony maintaining a dwelling for a controlled substance.

They were arrested in connection to an incident on October 19 when Sheriff’s Investigators executed a search warrant at the Lundy Road address. The search came after an investigation that spanned several weeks following the theft of vehicles and motor vehicle parts from farms and rural residences throughout northern Iredell County.

The investigation led to the identification of suspects living at the Lundy Road address. Detectives began conducting surveillance and interviewed several witnesses in the area. On October 11, an Officer stopped a white Ford Mustang in the area of Lundy Road for a traffic violation. The vehicle was driven by Brandon Hugh Bell, who said he lived at the Lundy Road residence. At the time of the vehicle stop, nothing out of the ordinary was found. Bell was cited for traffic violations and released.

Based on that information, a search warrant was issued. When Officers arrived, they found Lowman, Bell, Ferguson, and Dugger. The search led to the discover of numerous items, including vehicle parts that had been recently removed from various vehicles, car batteries, tools, and the stolen white Ford Mustang, which was hidden in a barn on the property.

Yadkin County Detectives arrived and identified several of the tools and vehicle parts stolen from their county. A quantity of meth was also found in the home. The suspects were arrested and taken to the Iredell County Detention Center. Lowman was given a $100,000 secured bond. Bell’s bond was set at $25,000, secured. Ferguson and Dugger were each given a $15,000 secured bond. They will all appear in District Court on November 9.

At the time of his arrest, Lowman was currently out on bond from charges earlier this year, including felony counts of possession of stolen property, possession of heroin, breaking & entering, and possession of meth.

The investigation is ongoing with additional charges anticipated.