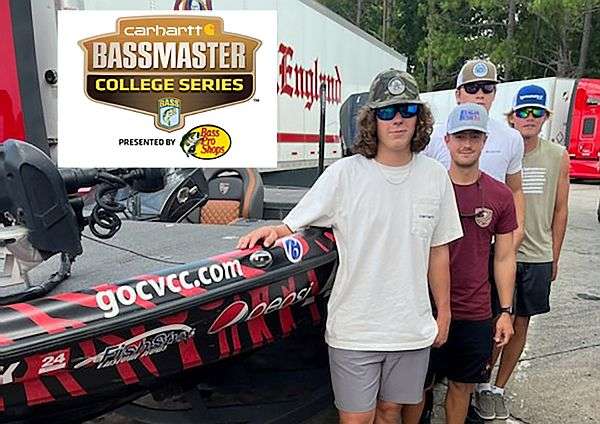 Four Catawba Valley Community College anglers are aiming to bring home a national title this week when they compete this Friday through Sunday at the 2022 Bassmaster College Series National Championship held on Winyah Bay in South Carolina.

“Winyah Bay and the surrounding rivers can be extremely tough to figure out because of the tidal influence,” Mayo said. “This is the first time our anglers have fished tidal waters, and there are so many factors that come in to play. We have talked a lot about changing tides and how to fish them.”

For Keller and Smith, this is their first-ever appearance in a collegiate national championship tournament.

“It’s an awesome opportunity to be able to represent CVCC at the national level,” Keller said. “It’s a huge accomplishment just to make it to this tournament, and we are super blessed and thankful to be a part of it.”

Smith and Keller qualified for this event by virtue of their seventh-place finish in June at the B.A.S.S. Collegiate Wild Card tournament on Logan Martin Lake in Alabama.

“I’m really excited about it, but the nerves haven’t sank in yet,” Smith said. “We just want to try to treat this like any other tournament and not let it get to us.”

This will be the third trip to a national tournament for Bailey and Eggers’ team, and they’ve already set some goals for this week’s event, including finishing among the top three teams to earn a spot in the College Classic Bracket.

“Lane and I are hoping for a good tournament this week,” Eggers said. “Fishing somewhere like we’ve never fished before is going to be the challenge, but I’m confident we can figure something out and make the College Classic Bracket. That’s the goal.”

Despite how they finish, Bailey is excited for another chance to represent Catawba Valley Community College at yet another national bass fishing tournament.

“Just having the opportunity to be here and represent the school is just crazy,” Bailey said. “Getting here is a big challenge for sure, and you have the best in the country competing against each other this week. We are happy to represent CVCC.”

The tournament field of more than 100 teams from across the nation launches on Friday starting at 6:30 a.m. from the Carroll Ashmore Campbell Marine Complex in Georgetown, S.C. Weigh-ins take place at 2:30 p.m.

Mayo is excited to see how her two competing teams will do at this championship event, and she has high hopes for both groups.

“We have two very strong teams here, and they have all put in a lot of time preparing for this championship,” Mayo said. “I’m looking forward to seeing how it all plays out.”