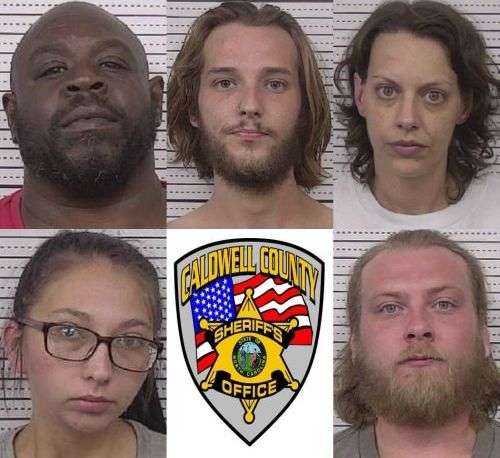 All of the suspects with the exception of Gerst were charged with felony counts of possession with intent to manufacture, sell, and deliver heroin, and maintain a vehicle or dwelling for controlled substance. Gerst was charged with felony counts of possession of heroin and maintaining a vehicle to keep or store a controlled substance.

On Wednesday, a home described as a nuisance residence was raided by the Caldwell County Sheriff’s Office SWAT and ICE Units. This home was allegedly a location that supplied heroin and fentanyl to the residents of Caldwell, Burke and Catawba counties. A search warrant was executed at the residence, which is the home listed as the addresses of four of the suspects on Fence Street in Granite Falls.

Agents conducted a search of the home and vehicles on the property. They reportedly found more than four grams of heroin and approximately $8,000 in US currency.
As a result, all four residents were arrested and charged. McCullough is currently on probation from a prior narcotics conviction in 2020.

All five suspects were brought to the Caldwell County Detention Center. Gerst was given a $10,000 secured bond, the other four individuals received $30,000 secured bonds. McCullough is not currently listed as an inmate, the other four suspects remained in jail as of earlier today (September 10). They were all scheduled to appear in District Court Thursday (September 9).

An officer-involved shooting is under investigation. Thursday (September 30) at 10:37 p.m., Hickory Police received…