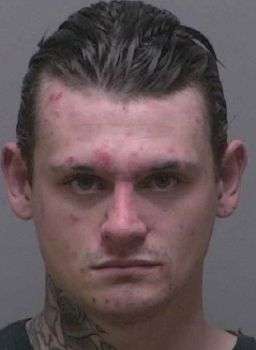 25-year-old Marcus Daniel Sintoni of Nellie Circle of Denver has been arrested by Lincoln Co. Sheriff’s Detectives for felony breaking & entering a building and misdemeanor breaking into a coin or currency machine. He was also charged with seven felony counts of breaking & entering a motor vehicle and one count of misdemeanor larceny. Sintoni was charged in connection to break-ins that occurred in May 2020 and July 2020.

On May 7, Deputies were dispatched to the Gates community in the area of Sedgebrook Drive West in Stanley. A number of unlocked vehicles were broken into and items were stolen. The victims provided surveillance images that showed a then-unknown suspect.

On July 20, Deputies were dispatched to a break-in alarm at the Crafty Burger restaurant on Brentwood Road in Denver. Deputies saw one person leaving the area on a bicycle. The suspect saw the Officers and fled on foot into a nearby wooded area. Surveillance images showed the suspect inside the business checking the cash register and coin-operated machines for possible items to steal.

Detectives determined that the photos at the store break-in and the vehicle break-ins were of the same person. That person was identified as Marcus Daniel Sintoni. On September 14, Deputies arrested Sintoni after he was found hiding in the kitchen at a home on the 7,900 block of Hager’s Ferry Road.

Sintoni was placed in the Harven A. Crouse Detention Center under a $60,000 secured bond. He’ll appear in District Court on October 6.

28-year-old Dewayne Jaron Clark, who is listed as a homeless person from Hickory, was arrested…