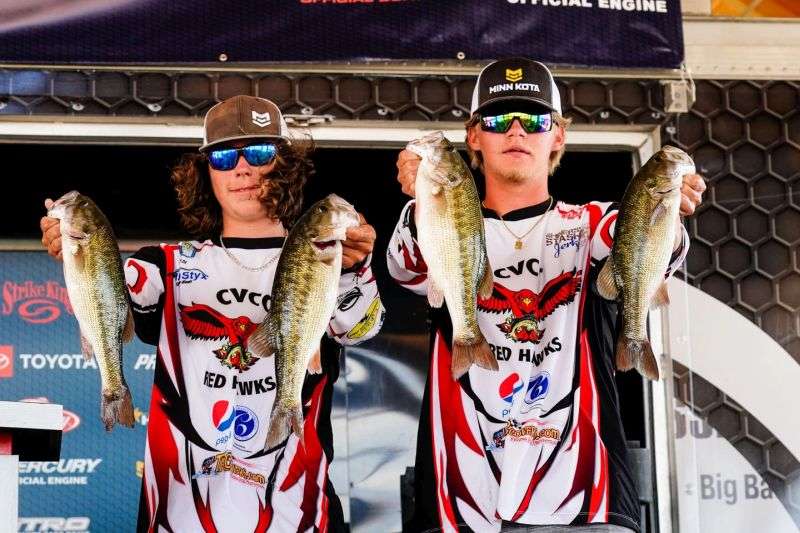 The Red Hawks finished the event with a pair of top-10 finishes — the first time in program history this has happened.

Qualifying for their first-ever national championship were the Catawba Valley duo of Hunter Keller and Wes Smith, who finished this past week’s tournament in career-best seventh place. Keller and Smith caught 10 bass weighing 23 pounds, eight ounces.

“I’m excited for Hunter and Wes,” said Catawba Valley bass fishing head coach Angela Mayo. “They have worked hard this year putting in long hours on the water during practice, and it has finally paid off.”

Keller said this past weekend’s performance was a breakthrough moment for himself and Smith.

“This season started out pretty lackluster for the both of us,” Keller said. “With the big jump over to the college series this year, it was a lot to take in. After settling in and working extra hard, we finally starting getting to where we wanted to be. We missed the cut by small margins at Smith Mountain Lake, Norfork Lake and Lake Norman, but it feels really good to finally have a good solid finish after the year we’ve had.”

Smith said the seventh-place performance started with a great practice before the event and some key strategy during it.

“We thought we came up a little short, but the feeling is unbelievable,” Smith said. “The whole reason we went down to Logan Martin was to qualify for the national championship and for us to do that and have a seventh place overall finish is great.”

Bailey and Eggers also triple qualified for the Bassmaster College Series National Championship, which takes place Sept. 2-4 at Winyah Bay in Georgetown, S.C. This will be the Red Hawks’ next bass fishing event on their schedule.

Also finishing in the top half of the 105-boat field for the Red Hawks were Spencer Black and Grant Harris, who finished in 42nd place. Black and Harris caught eight bass weighing 15 pounds, 12 ounces.

Mayo is excited for all four of her anglers who are now nationally qualified.

“I have no doubt that Hunter and Wes, along with Justin and Lane, will represent the Red Hawk Nation well at the Bassmaster College National Championship at Winyah Bay in September,” she said.

The Hickory Crawdads downed the Greenville Drive, 8-5 Sunday on the road. Hickory started out…

App State women's tennis closed the weekend with a 4-0 loss to Troy Sunday. In…