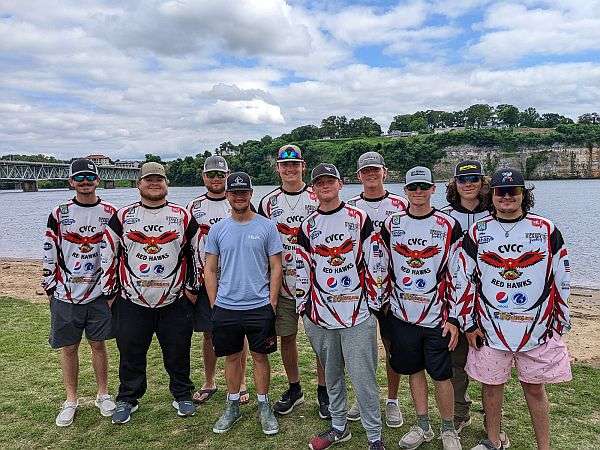 The Catawba Valley Community College bass fishing team recently completed its most successful national appearance to date at the BoatUS Collegiate Bass Fishing Championship on Pickwick Lake and Wilson Lake this past weekend in Alabama.

Competing in a field of 400 anglers and 200 boats comprised two- and four-year colleges and universities, the Red Hawks placed three of their duos in the top 100, including a finish among the top 15 teams competing.

“Our guys have worked incredibly hard this year by putting in long hours on the water, studying maps of the lakes and doing a lot of research,” said Catawba Valley bass fishing head coach Angela Mayo. “Their hard work has certainly paid off. I am extremely proud of each one of them.”

Leading the charge for the Red hawks were the duo of Lane Bailey and Justin Eggers, who started day one of the tournament in 19th place after catching 16.03 pounds of bass.

“This one was special for us,” Bailey said. “We had a terrible practice, and we have not had a good finish in a national championship until this week. To be able to get up there with all of the best anglers of the country puts a smile on our faces.”

Eggers and Bailey improved that mark in day two, moving up to 13th place in the final standings just ounces outside of the top 10.

“We have been to Pickwick Lake a couple times and every time has been a different experience,” Eggers said. “With a very tough practice, Lane and I decided to scratch everything and just fish how we fish at home. To have this type of finish at the national championship level is a great feeling.”

Mayo is proud of Eggers and Bailey, who have been fishing and playing sports together since they were young children.

“Lane and Justin came in to this tournament determined,” Mayo said. “They have been here several times and have struggled to figure out this lake. They weren’t happy with what they found in practice so I told them to just go fishing. They are very good shallow water fishermen, and they needed to fish their strengths. I’d say they did a fantastic job.”

Not far behind Eggers and Bailey in the final standings were CVCC teammates Hunter Keller and Carson Eckard, who caught 20.13 pounds of bass to finish in 54th place.

The Red Hawks’ Wes Smith and Grant Harris also finished among the top half of the field after catching 13.40 pounds of bass to finish in 90th place.

Two more Catawba Valley duos — Nathan Smith and Cabe Mackey as well as Spencer Black and Caleb Lonca — also competed at the event. They caught fish, but missed the weigh in due to trouble with the locks along the waters.

Regardless of their finishes, Mayo is proud of all 10 Red Hawk anglers who competed at the national level — the most in program history to do so.

“When we came to Pickwick two years ago for our first ACA (Association of College Anglers) National Championship, our anglers looked so young,” Mayo said. “It has truly been a pleasure to watch them grow into talented anglers and confident young men.”

With a top-five finish, the Red Hawks can qualify for the Wylie X College Faceoff, which takes place on Saturday also on Smith Mountain Lake.

The Hickory Crawdads opened up their six-game road series against the Asheville Tourists, falling 4-2.…