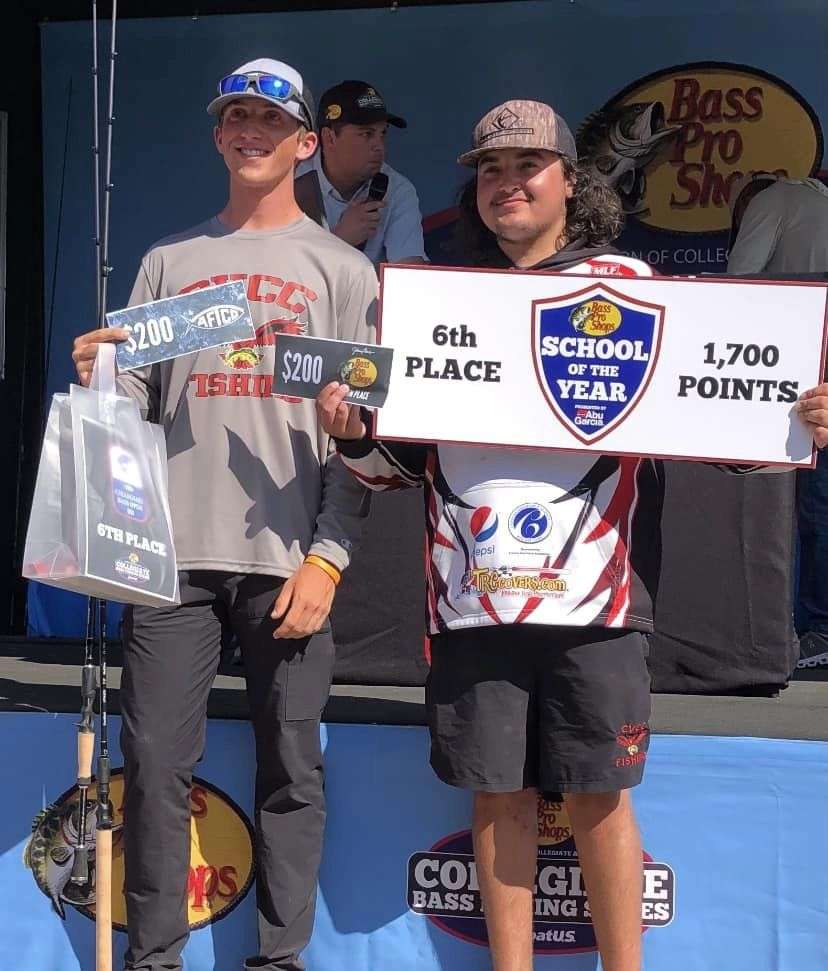 “The team worked hard on the water trying to figure out the finicky fish and did a fantastic job,” said Catawba Valley bass fishing head coach Angela Mayo. “This time of year is difficult on any lake in the country. The fish are transitioning from summer locations to fall locations and can be difficult to pattern.”

At the AFTCO Collegiate Bass Open, the Red Hawk duo of Jadon Spencer and Cabe Mackey finished in sixth place overall out of 208 competing teams.

Mackey said the performance started with a tremendous practice on Thursday before competing on Friday and Saturday.

“The lake was tough fishing,” he said. “At 1 o’clock on the first day we only had one keeper so we scratched with everything we had and decided to grind out one area. It all fell into place from there. It’s pretty exciting finishing sixth, and it gives me a lot of confidence going into the spring considering how elite the competition is around us.”

For Spencer, who is an Arkansas native, it was a homecoming unlike any other.

“It was great getting to go home and fish the lake I grew up on while also getting to represent the Red Hawks,” Spencer said. “Lake Dardanelle can be a tough lake to fish, but Cabe and I managed to stay consistent all week and caught a limit both tournament days.”

The Red Hawks’ Hunter Keller and Wes Smith also had an impressive tournament, moving up from 91st after day one to 35th in the final tournament standings. Keller and Smith caught 11.88 pounds of bass during the event.

Also finishing in the top half of the field were the team of Carson Eckard and Grant Harris in 72nd with 7.65 pounds of bass and Lane Bailey and Justin Eggers in 96th place with 6.22 pounds of bass.

“The ACA tournaments are so important in the School of the Year race because they are worth double points,” Mayo said. “We get points based on our highest two finishes so having Jadon and Cabe finish up in sixth place and Hunter and Wes not too far behind in 35 is huge.”

At the Palmetto Boat Center College Series on Lake Norman, both competing Red Hawk teams finished inside the top 25, against 46 boats and 92 anglers.

The Red Hawks’ Will Hammond and Cole Weaver finished in 11th place, catching 10.12 pounds of bass.

Catawba Valley’s Dalton Eury and Brendon Vinton also finished in the top half of the field. Eury and Vinton caught 8.95 pounds of bass to place in 22nd.

Overall, Mayo is proud of the performances from all of her anglers this past weekend.

“These guys continue to work hard every time they are on the water,” she said. “I’m looking forward to seeing them continue to grow.”

The Catawba Valley Community College bass fishing team returns to action on Friday for the Major League Fishing Southeastern Conference tournament, which is being held at Pickwick Lake in Counce, Tenn.