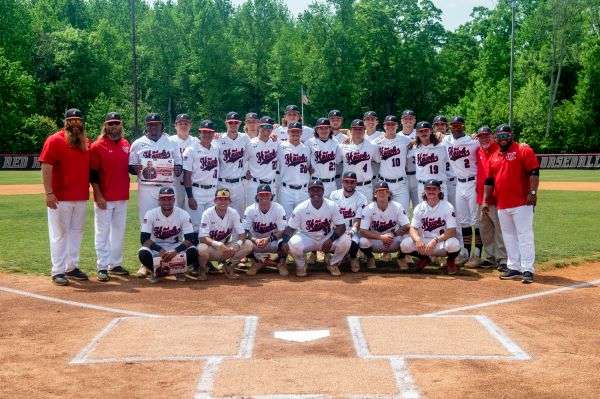 The Red Hawks improve to 32-24 overall and 24-12 in conference games. This marks the 12th straight season that Catawba Valley has won at least 30 or more games on the baseball diamond.

In the first game of a doubleheader Saturday that CVCC win 13-5, the Red Hawks took game one of the series against the Eagles in eight innings on Saturday. The Red Hawks had 13 hits at the plate and a pair of three-RBI performances from Jackie Jimenez and Jack Stevens.

Jimenez and Stevens both tallied a team-high three hits, including a double apiece. Reece Landmark added two hits, while Walker Waters recorded a double. Juan Moreno, Graham Dalton, Lane Rhodes, Jean Carlos Diaz and Landmark all drove in one run each for CVCC.

On the mound, Catawba Valley starting pitcher Bryson Hammer earned the win. He allowed one hit, one run, three walks and struck out six batters. He improves to 6-2 on the season. Bailey McGinnis and Aiken Minton closed out the final five innings for CVCC, striking out a combined seven batters.

In game two, the Red Hawks scored five runs early and held off a late charge by the Eagles to sweep Saturday’s doubleheader at Henkel-Alley Field winning 5-3.

Reece Landmark led Catawba Valley, going 2-for-2 at the plate with two runs and two RBI. Zack Summerville, Jackie Jimenez and Jack Stevens also drove in one RBI each for CVCC.

CVCC reliever Jonah Milchuck earned the 2.2 inning save — his sixth of the spring. Milchuck struck out five batters.

The Red Hawks celebrated a successful “Sophomore Day” with a seven-run victory in the conference series finale against the Eagles on Sunday, with a 9-2 victory.

Cunningham drove in a team-high four RBI, while Jackie Jimenez, Masashi Takegama, Lane Rhodes, Landmark and Summerville each drove in one run.

The Red Hawks will enter as the No. 1 seed in the West division and take on the No. 4 seed from the East division in the first round.

Alan Cress, an App State alum who worked as an assistant coach for his alma…