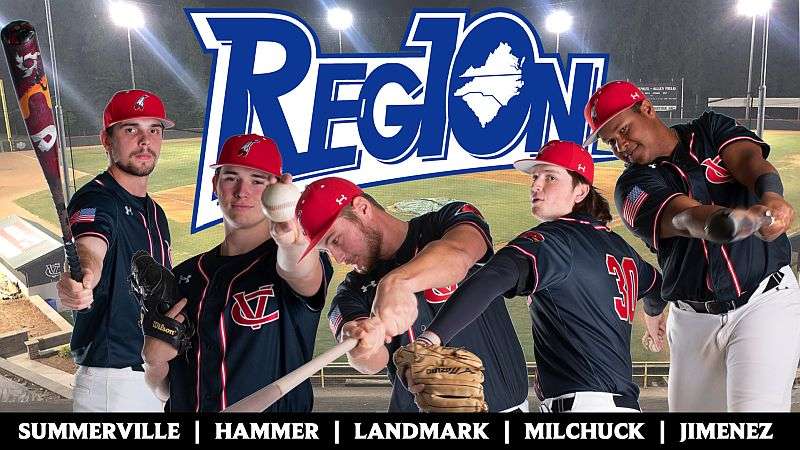 Five members of the Catawba Valley Community College baseball team have been honored by Region 10 following the 2022 season.

Hammer finished his freshman season at Catawba Valley with 116 strikeouts — the second-most in a single season in program history behind only Julian Smith (130). Hammer’s strikeout total is also the most in the nation among National Junior College Athletic Association (NJCAA) Division II pitchers.

Summerville finished his sophomore season season as the Red Hawks’ team leader in RBI (57), hits (72), triples (four) and runs scored (58), and he tied for the team lead in home runs (10).

Jimenez tied Summerville for the team lead in doubles (14), and he also drew a team-high 38 walks while recording a team-best .507 on-base percentage. He was also second for CVCC in runs scored (52), hits (51) and home runs (eight).

Landmark finished the 2022 spring season with a team-best .357 batting average and .628 slugging percentage. He tied Summerville for the team lead in home runs with 10, and he drove in the second most runs for Catawba Valley this spring with 38.

Milchuck was a key piece of the Red Hawks bullpen as the team’s main closer. He recorded 40 strikeouts and just nine walks in 26.2 innings pitched.

Milchuck also tied the school record for saves in a single season (7) set by Jacob Breakfield in 2014 and 2016.

Both Milchuck and Hammer were a part of a Red Hawk pitching staff that set a new school record for strikeouts in a single season with 610.

All five of these players were part of Red Hawk baseball team that went 37-26 this spring and won its first Region 10 tournament championship since 2015.

The Hickory Crawdads defeated the Winston-Salem Dash 5-2 Sunday on the road. Neither team could…

On Saturday, the Lenoir-Rhyne Softball team suffered their worst lost in the SAC Tournament since…