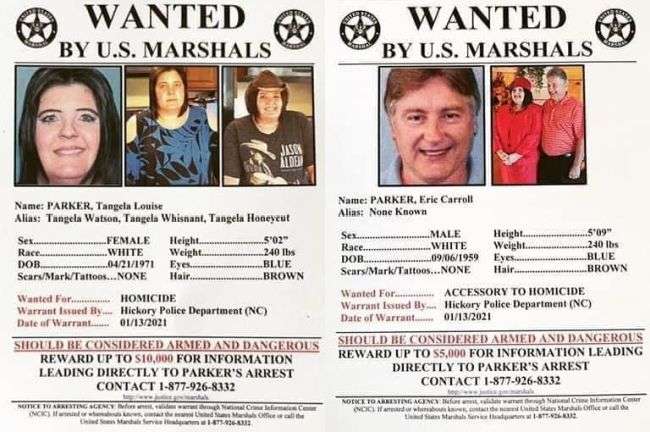 The shooting occurred at 2:30 p.m. on that date at T.C.S. Designs on 9th Avenue N.E. in Hickory. Authorities said it was the result of a dispute between two employees. Officers found the victim in the business suffering from gunshot wounds. Ms. Marlow was transported to Wake Forest Baptist Medical Center in Winston-Salem where she passed away as a result of her injuries.

According to reports out of Arizona, U.S. Marshals said they worked over 30 leads stretching across eight states before developing information that the Parkers were staying at a Phoenix residence under the fake names of Jason and Elizabeth Reardon.

Published reports out of Phoenix say at approximately 12:30 p.m. Tuesday, members of the U.S. Marshals tracked the Parkers down to a home near 35th Avenue and Deer Valley Road, where the couple was brought into custody. Police also reportedly found a Honda CRV they were known to drive at the home.

The fatal shooting in January was reportedly the result of a dispute at the workplace between Tangela Parker and Phelifa Marlow. Parker had reportedly been reprimanded as a result of the dispute and was sent home for three days. Tangela and Eric Parker were listed as inmates at the Maricopa County Jail in Phoenix as of earlier today (July 14).

The Lincoln County Sheriff's Office asking for the public's help in finding a runaway teen.…