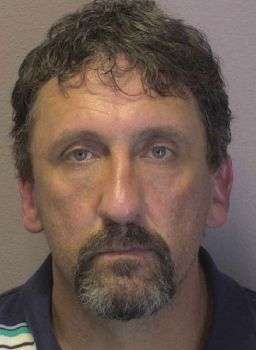 46-year-old Kevin Allan McElroy of Herman Sipe Road in Conover was arrested by Hickory Police at 7:20 Friday evening (August 21) on an outstanding warrant for a felony probation violation. He was also charged with misdemeanor possession of stolen property. McElroy is on probation as he serves a 24-month suspended sentence following a March 2020 felony conviction in Lincoln County for possession of a schedule I controlled substance.

A second suspect, a 39-year-old woman from Denver, N.C. was also arrested. She was charged with misdemeanor possession of a schedule IV controlled substance.

Both suspects were taken into custody without incident following a traffic stop at the intersection of 15th Street S.E. and Tate Boulevard in Hickory. During the stop, Officers found a stolen N.C. license plate, five dosage units of alprazolam, and 0.2 grams of methamphetamine.

They were placed in the Catawba Co. Detention Facility where McElroy was given a $16,500 secured bond. The female suspect’s bond was set at $1,000, secured. She has since been released. Both will appear in District Court on September 14 in Newton. McElroy has a Superior Court date on the probation violation scheduled for August 31.

Shooting in Hickory Leaves One Person in Critical Condition