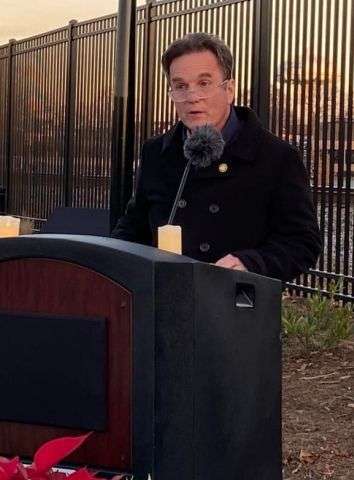 Hickory mayor Hank Guess at the dedication of the new pedestrian bridge Thursday, December 16
Photo courtesy of City of Hickory

Immediately following the historic ribbon cutting, the City held the ceremony to “Light It Up for Rudy” as the City Walk pedestrian bridge was illuminated for the first time and officially named and dedicated as the Rudy Wright Bridge in honor of late Hickory mayor Glenn Rudolph “Rudy” Wright, Jr. Wright served the City of Hickory as mayor for 16 years and was instrumental in the City’s bond program. He passed away in 2017 while still serving the city as mayor.

The City Walk is the first of five segments of the Hickory Trail, a ten-mile multiuse path that is designed to improve quality of life and drive economic development by connecting destinations across the city, including Lenoir-Rhyne University, the historic Ridgeview community, downtown, the Old Lenoir Road or OLLE Arts District, Lake Hickory, L.P. Frans Stadium, and Hickory Regional Airport.

The Hickory Trail is one of the Crafting Hickory projects and it will provide bicycle and pedestrian safety while connecting popular destinations and amenities. In addition, the Riverwalk, which will be developed from Geitner Park along the river, is expected to spur new retail jobs and residential growth.