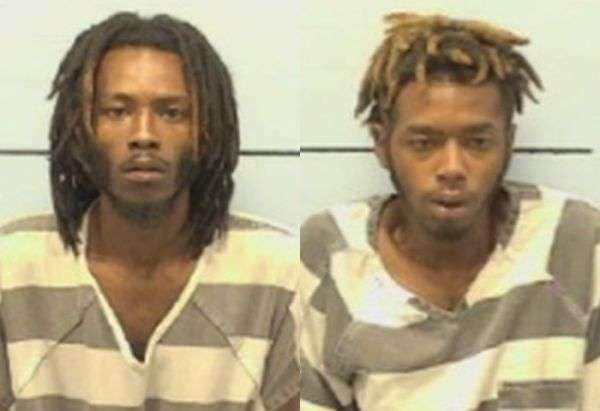 24-year-old Jer’Michael Stefon Davidson and 20-year-old Lee Edward Owens, both of Charlotte, were arrested last Thursday (October 13) by Burke County Sheriff’s Officers. Davidson is charged with felony counts of flee to elude arrest and possession of firearm by a felon and Owens is charged with felony possession of schedule II controlled substance and misdemeanor carrying a concealed weapon.

On Thursday shortly after 9 p.m. Burke County Communications received an anonymous call regarding a disturbance at Pond View Apartments on Main Avenue East in Hildebran. The caller described two men who were in a tan, older model car brandishing multiple firearms in the parking lot of the apartment complex and causing a disturbance. One was screaming for a person to come downstairs.

A chase followed with speeds reaching 115 mph on Interstate 40 eastbound. The pursuit crossed the line into Catawba County and continued to Exit 125 in Hickory, where the suspects crashed their vehicle on the on ramp. Burke County Investigators took the suspects into custody. Mutual aid was provided by the Hickory Police Department and North Carolina Highway Patrol.

Both suspects were armed and the driver, Davidson, had his infant in the rear of the vehicle in a car seat. Further investigation revealed that the passenger, Owens, had crack cocaine in his possession. Davidson’s bond was set at $35,000 secured, Owens received a $5,000 secured bond. Both suspects remained in jail in Morganton as of earlier today and are scheduled to appear in District Court November 4.