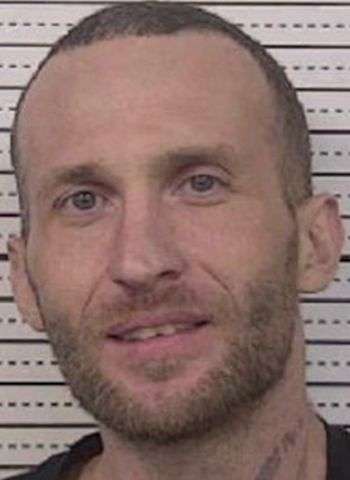 38-year-old Joshua Eugene McClure of Boxwood Street in Hudson was arrested Wednesday (January 18) by Caldwell County Sheriff’s Officers. He’s charged with felony counts of larceny of a motor vehicle, possession of a stolen motor vehicle, and flee to elude arrest with a motor vehicle. McClure is also cited for hit and run with property damage.

Wednesday morning, Morganton Public Safety Officers were asked to assist the Caldwell County Sheriff’s Office with a vehicle pursuit that was coming into the city. They were pursuing a stolen vehicle from Caldwell County. Public Safety units moved into position to assist near Lenoir Road and Shadowline Drive. Stop Sticks were deployed to deflate the remaining two tires on the vehicle, which had traveled from Lenoir on two tires and two rims after striking stop sticks there.

After a successful deployment the vehicle continued into town on Lenoir Road, making a right on to Avery Avenue with Caldwell County and Burke County Deputies in pursuit. The suspect stopped the stolen 1993 Toyota Corolla at the intersection of Avery Avenue and North Green Street after fire broke out in the engine compartment as well as the right rear portion of the vehicle due to friction from the rims on deflated tires. The alleged offender, Joshua McClure, then jumped and ran from the vehicle with officers in pursuit on foot. He continued down Avery Avenue making a right onto North Sterling Street before being taken into custody on the sidewalk.

Public Safety Stations 1 & 3 responded to the vehicle fire and quickly extinguished the flames. The roadway was shut down for approximately an hour as units worked to get the vehicle towed for evidence purposes and medical treatment was administered for the alleged offender. McClure was transported to UNC Health by ambulance. He was later brought to the Caldwell County Detention Center where he remained as of earlier today (January 19) under $52,500 secured bond. District Court dates were scheduled today and for February 27 in Caldwell County. Charges were also pending from the Morganton Department of Public Safety.