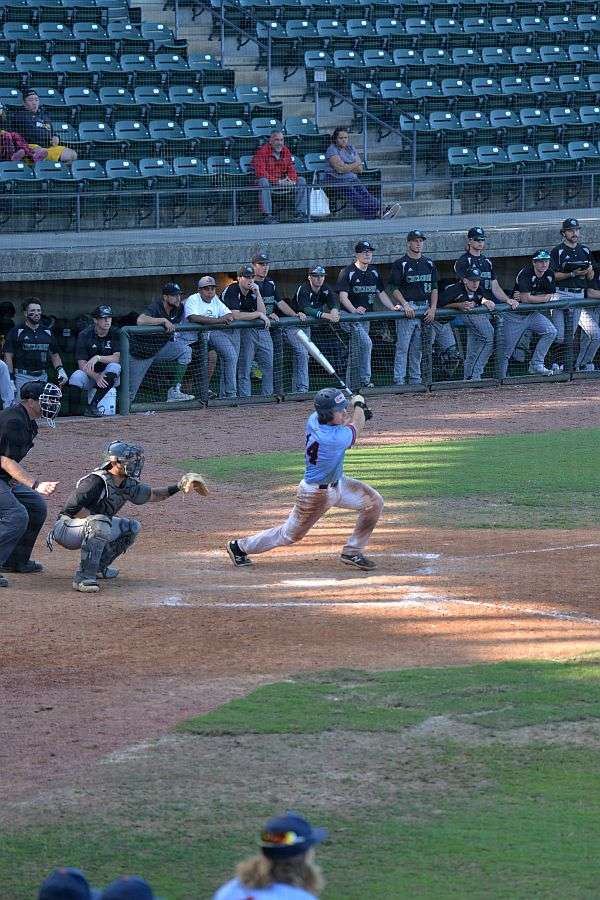 Jacob Bebber connects on an RBI single to right field in the bottom of the ninth inning to give top-seeded Caldwell a 3-2 victory over St. Cloud Saturday in the opening round of the NJCAA Division Three Baseball World Series at Pioneer Park in Greeneville, TN.
photo courtesy of Edward Terry, CCC&TI Public Information

Jacob Bebber hit a two-out RBI single in the bottom of the ninth inning to give Caldwell a 3-2 victory over St. Cloud in the opening round of the NJCAA Division Three Baseball World Series at Pioneer Park in Greeneville, TN on Saturday.

With two outs in the bottom of the ninth of a tied game, Cole Hales drew a walk. Steven Smith followed with a double down the third base line to give the Cobras runners at second and third. Bebber singled to right field to give the Cobras the walk off victory.

Caldwell’s Seth Willis picked up the complete game victory on the mound. The West Lincoln product allowed only two runs off five hits, while striking out seven to get his thirteenth victory of the season (13-2).

Carson Geislinger picked up the loss on the mound for the Cyclones. Starter Christian Lessman went eight innings, allowing two runs off six hits while striking out five and walking four.

Caldwell got on the board first in the bottom of the first inning when Breon Ishmeal delivered a two out RBI single to plate Bebber. The Cyclones would answer back in the top of the second inning when Dylan Haskamp hit a two-run homerun to give the Cyclones the lead.

Caldwell tied the game in the bottom of the fourth inning on a Mason Lyda sacrifice fly RBI to score Michael Logan.

Caldwell, making their first appearance in the World Series, won their 25th game in a row and improve to 47-7.

Phillip Cole blasted a three-run home run, as part of a six-run sixth inning, as…

Representing Boone RTC, wrestlers from App State had strong freestyle showings at the U23 World…