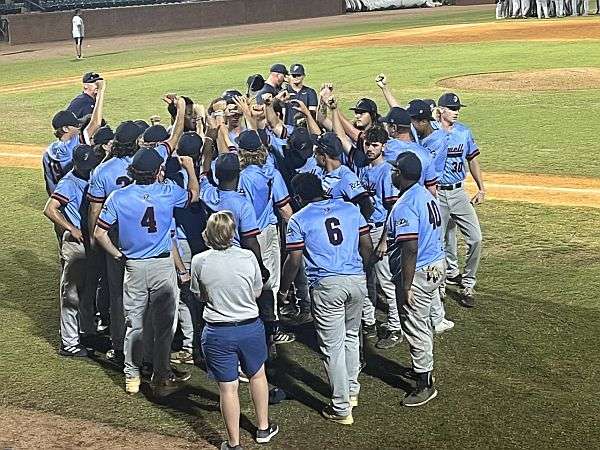 The Caldwell Cobras gather one last time after falling to Dallas College-Eastfield by an 11-1 score in the elimination semi-final of the NJCAA Division III Baseball World Series. The Cobras finished the season 49-9, third in the nation.
photo courtesy of Edward Terry, CCC&TI Public Information

Caldwell Community College and Technical Institute baseball would defeated St. Cloud 4-0 in an elimination contest Tuesday afternoon, but the Cobras season would come to an end, falling to Dallas College-Eastfield, 11-1.

Facing elimination, Caldwell scored two runs in the bottom of the seventh inning to break open a scoreless game and went on to defeat St. Cloud 4-0.

Will Westbrock pitched seven and a third innings, allowing no runs. St. Cloud would load the bases in the eighth inning with one out, but relief pitcher Steven Smith would get a pop-up and fly out to end the threat.

In the bottom of the seventh inning, Hayden Setzer entered the game as a pinch hitter and hit a double into left field. Mason Lyda’s bunt moved Setzer to third with one out, allowing Kayl Ratliff to hit a sacrifice fly RBI to give Caldwell a 1-0 lead. Cole Hales would follow with a two out single and would be driven in by Steven Smith’s double to center field to give Caldwell a 2-0 lead.

Caldwell would get two insurance runs in the eighth inning. Breon Ishmael would reach on an error and Mike Logan would be hit by a pitch to give the Cobras two on base with one out. Setzer doubled to left field to score Ishmael and Logan, giving Caldwell a 4-0 lead. Smith would retire the Cyclones in order in the ninth inning to get the save and secure Caldwell’s victory.

St. Cloud finished their season at 26-13, fourth place in the nation. Caldwell (49-8) advanced to the elimination semi-final to face Dallas College-Eastfield.

Dallas College-Eastfield scored three runs in the bottom of the fourth inning to break the scoreless tie and seized control of the elimination final. The Harvester Bees would go on to defeat Caldwell 11-1 in 6 innings.

In the fourth inning, Dallas College-Eastfield got three runs off three hits, including an RBI double by Chris Dickens and an RBI single by Jaylen Morgan. The Harvester Bees added five more runs off three hits in the fifth inning, including two more RBI by Dickens on a single through the right side. Morgan would also get another RBI from a double down the right field line.

With two outs in the top of the sixth inning, Caldwell’s Kayl Ratliff would be hit by a pitch. Tyler Bradley would single down the third base line and a throwing error by the third baseman would allow Ratliff to score from first base, making the score 8-1.
Dallas College-Eastfield would end the game via the ten-run mercy rule in the bottom of the sixth, scoring three runs off four hits.

Dallas College-Eastfield (47-11-1) advanced to Wednesday’s championship game, where they will face Herkimer College. It will be a rematch of Monday’s winner bracket final, where Herkimer won 9-3. A win by Herkimer (40-7) would give them the national championship; a loss would force a winner-take-all game on Thursday.

Caldwell finished the season 49-9, third place in the nation. The Cobras were also Region 10 and Mid-Atlantic District champions.

The South Atlantic Conference postseason Tennis awards were announced, and Lenoir-Rhyne was well represented in…