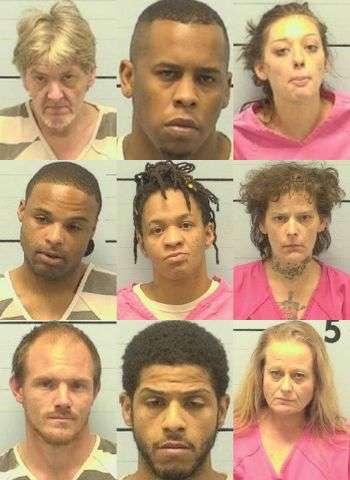 Over the last four months, the Burke County Sheriff’s Office and other emergency personnel received more than 25 calls for service on William Parks Lane in Morganton, regarding poisoning, sick and injured persons, drug activity, and overdoses. One of the overdoses resulted in death on February 19, 2021 from suspected heroin/fentanyl use.

Burke County Narcotics investigators began a lengthy investigation into two residences on William Parks Lane. On March 26 investigators searched Pendley’s mobile home and they reportedly found meth and drug paraphernalia. Pendley, Brown and the individual charged with the misdemeanor were all in the residence and were arrested.

All were transported and held at the Burke County Jail. Further investigation determined that distribution and sales of illegal controlled substances were also occurring at another address on William Parks Lane in Morganton. On March 31, narcotics investigators with the Sheriff’s Office and Morganton Department of Public Safety searched that residence and made contact with over a dozen individuals at the residence.

Multiple controlled substances including heroin and meth along with drug paraphernalia were reportedly seized. Riddle, Fleming, Roberts, Starnes, and Estevez were all at the residence and were charged. Ervin and Christian were also at that home during the search and were arrested with the assistance of North Carolina Probation officers.