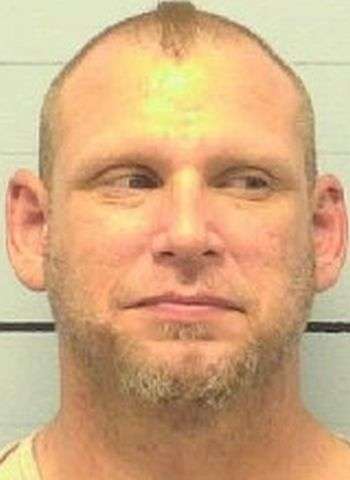 41-year-old Jimmy Frank Peeler of Rhoney Road in Connelly Springs was arrested Friday (March 12) by Burke County Sheriff’s Officers. He was charged with felony counts of possession of schedule II controlled substance, speeding to elude arrest, possession of a weapon of mass destruction, and possession of a firearm by a felon.

While patrolling Highway 18 South at approximately 8 a.m. last Friday, a Burke County deputy spotted a green Chevrolet S10 pickup truck without a tag. The deputy initiated his blue lights when the truck turned on to St. John Church Avenue. The driver, identified by the officer as Jimmy Frank Peeler, sped up.

The deputy was assisted by other officers and a vehicle chase ensued. The pursuit occurred over a period of approximately 25 minutes in southern Burke County and parts of Lincoln, Catawba and Cleveland Counties. Speeds reached up to 90 mph until Peeler ran out off the road, where he jumped and ran from the vehicle.

Following a short foot chase, deputies took Peeler into custody. The suspect was reportedly found in possession of a modified 12-gauge single shot shotgun, a gram of meth and a smoking pipe. Peeler, who was under active probation with previous probation revocations, was arrested and charged.

He was placed in the Burke County Jail under a $43,000.00 secured bond. He was scheduled to appear in District Court Monday (March 15). He remained in jail as of earlier today (March 16). The truck was seized under the “run and you’re done” law.

37-year-old Jeffrey Gray Hatcher, Jr. of Greensboro was arrested on charges filed by the Iredell…