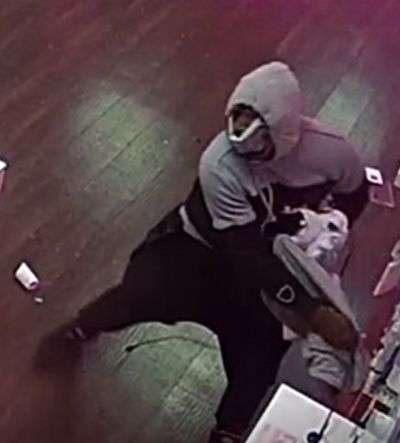 Lincoln County Sheriff’s Detectives are investigating a break-in and the theft of cell phones from the T-Mobile store on Cross Center Drive in Denver.

Deputies were dispatched to the break-in at about 2:40 a.m. yesterday (May 26). Officers found the front door glass broken out and a large rock that was used to break the window. Deputies entered the store, but did not find anyone inside.

Surveillance cameras show the suspect as he entered the business at 2:06 a.m. The suspect kicked open the office door and made an unsuccessful attempt to open the safe. The suspect returned to the front of the store and grabbed two Samsung phones and six I-Phones before exiting the store at 2:09 a.m. The phones are valued at $6,730 and damage to the business was estimated at $500.

The suspect was wearing a gray & black hoodie and black pants. No direction of travel is available.