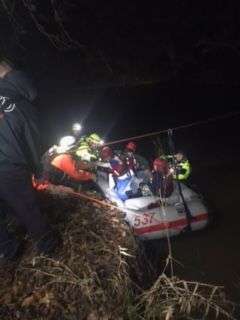 Deputies were dispatched to a lost person call at approximately 4:45 p.m. Thursday (December 17). Officers learned that three juveniles had walked into the woods from a residence on Antler Drive. Police made contact with one of the boys by cell phone and asked him if he could hear the sirens that had been activated. The boy said he could hear the siren in a direction north of where officers were located.

Deputies then entered the woods through an old logging road in an attempt to locate them. Contact was finally made with the youths near the creek that ran alongside the road. The juveniles were on the other side of the creek which had a number of swift water areas. Initially officers decided to walk the boys out to Brevard Place Road but determined the creek bank was too steep and brush was too heavy.

The Lincoln County Swift Water Rescue team was called in and quickly relocated the boys to the other side of the creek without incident. The juveniles, a 13 year-old-boy and two 12-year-old boys, were medically cleared by Lincoln County EMS and turned over to their parents.