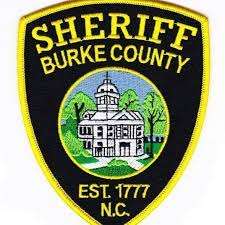 Thursday (September 10), at 7:59 p.m., while Burke County detectives were traveling east on Interstate 40, they noticed a motorcycle traveling at a high rate of speed was catching up with them from behind. The motorcycle abruptly changed lanes narrowly missing a passenger car and nearly striking the rear of the detective’s patrol vehicle.

The motorcycle was traveling recklessly, and the detectives tried to initiate a traffic stop near Exit 116. The motorcycle accelerated and two Burke County patrol deputies took over the chase with their blue lights and sirens at Exit 119. The motorcycle continued to recklessly pass vehicles in both lanes, between vehicles, and on the emergency lane as he traveled into Catawba County.

Near Exit 132 the motorcycle quickly pulled on the shoulder of I-40 and came to a stop. As one of the patrol deputies were pulling over onto the shoulder of I-40 the patrol car was struck from behind by an SUV. The motorcycle left the scene traveling west on the east bound side of I-40 and the pursuit was terminated. The three occupants in the SUV declined any medical treatment. The North Carolina State Highway Patrol was contacted and is investigating the collision.

The motorcycle driver was a white male wearing a yellow helmet. Anyone with any information is asked to call the Burke County Sheriff’s Office at 828-438-5500 or Morganton/Burke Crimestoppers at 828-437-3333.  All Crimestoppers tips are anonymous, and anyone with information leading to an arrest may receive a cash reward.

Authorities Seeking Information On Man Missing Since March Of This Year