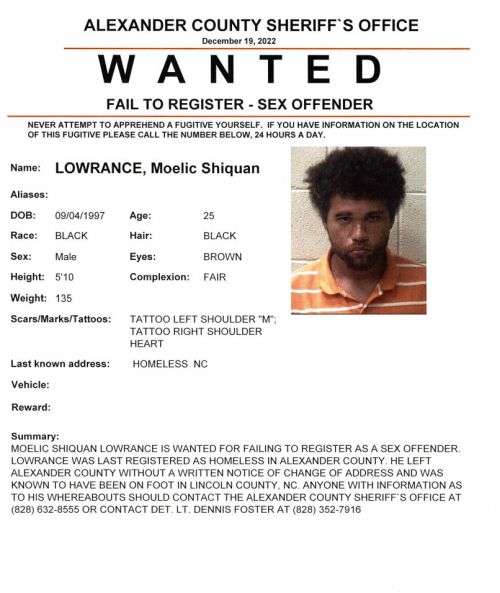 The Alexander County Sheriff’s Office is seeking a sex offender who is wanted for failure to register. 25-year-old Moelic Shiquan Lowrance, who is listed as a homeless person from Alexander County, is wanted by authorities.

According to the Sheriff’s Office, Lowrance left Alexander County without a written notice of change of address and was known to have been on foot in Lincoln County. He is described as a black male, 5’10”, 135 pounds with black hair and brown eyes. He has an “M” tattoo on his left shoulder and a heart tattoo on his right shoulder.

Lowrance is a sex offender as a result of a conviction in Catawba County in July 2017 for indecent liberties with a minor. The offense occurred in February, 2015 and the victim was three-years-old according to the Noerth Carolina Sex Offender Registry. Lowrance was 17-years-old at the time of the offense. He received a 16 to 29 month prison sentence and was released in September of 2018.

If you have any information regarding the whereabouts of Moelic Shiquan Lowrance contact the Alexander County Sheriff’s Office at 828-632-8555 or Detective Lt. Dennis Foster at 828-352-7916.