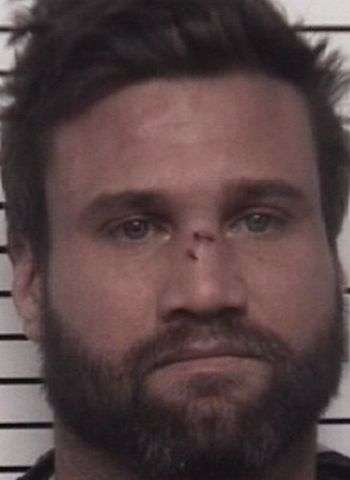 39-year-old Brian Kenneth Kinder of Waterford Drive in Mooresville was arrested Sunday (December 27) by Iredell County Sheriff’s Officers. He’s charged on a felony fugitive warrant along with a felony count of assault by strangulation inflicting serious injury. Kinder is also charged with two misdemeanor counts apiece of resist, delay, and obstruct a public officer and communicating threats, and single misdemeanor counts of assault on a female, injury to personal property, and false imprisonment.

Last Saturday (December 26) patrol deputies with the Iredell County Sheriff’s Office were notified of a domestic incident in the area of Brawley School Road, and Isles of Pines Road near Mooresville. The deputies met with the victim who was visiting for Christmas from California. The victim gave a statement to the deputies which identified the suspect in this investigation as Brian Kenneth Kinder.

Based on statements and evidence obtained, the deputies were able to obtain five arrest warrants on Kinder. While doing background on Kinder, it was determined he had outstanding arrest warrants from California with full extradition on a weapons related offense, and a conditional release violation.

On Sunday the Iredell County Sheriff’s Office received information about Kinder being at a residence on Waterford Drive. Deputies responded to the location in an attempt to serve the warrants. When they arrived, Kinder was inside the residence and refused to obey commands, and would not open the door. Kinder then threatened to harm any deputies who came to arrest him. Entry to the home was made, and Kinder was taken into custody.

Kinder was transported to Iredell County Detention Center where he was jailed without bond. A District Court appearance is scheduled Thursday (December 31) in Statesville.

Election Day is today (November 3) and, in addition to the Presidential race, there are…