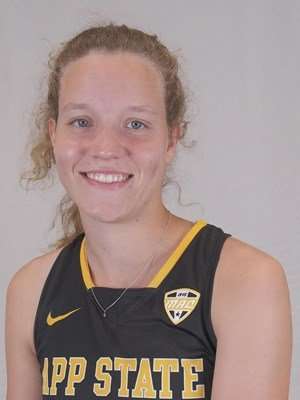 App State’s Friederike Stegen has been nominated by the university as a candidate for the 2022 NCAA Woman of the Year award.

Stegen led the Mountaineers’ field hockey team on and off the field her senior year and graduated in May 2022 with a degree in general marketing and a minor in international business. Stegen is remaining with the Mountaineers for an additional year to pursue a graduate degree.

In the fall of 2021, Stegen was named to the All-MAC First Team, the NFHCA Senior Team and the NFHCA All-Region Second Team. In September 2021, she became the all-time leader in assists at App State with 24.

The midfielder led App State to its first ranked win in program history in September, scoring or assisting on both goals in the Mountaineers’ two-point shutout over No. 24 JMU.

The NCAA Woman of the Year program was established in 1991 and honors the academic achievements, athletics excellence, community service and leadership of graduating female college athletes from all three divisions. To be eligible, a nominee must have competed and earned a varsity letter in an NCAA-sponsored sport and must have earned her undergraduate degree by Summer 2022.