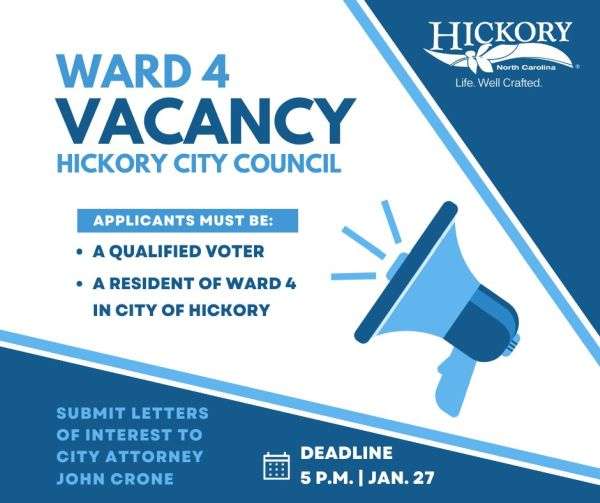 Hickory City Council is accepting applications to fill the Ward 4 City Council vacancy until the next general or special election. Applicants must be a qualified voter and a resident of Ward 4 in the City of Hickory.

The vacancy is the result of the resignation of Ward 4 councilman David Williams. He stepped down from City Council and was honored at Tuesday’s (January 17) regular meeting. Mr. Williams had served on Hickory City Council since 2017.

He was first elected to the Ward 4 seat in 2017 and was re-elected for a second term in July, 2022. The municipal election originally scheduled for November, 2021 was moved to the summer of 2022 so that redistricting could be studied with complete census data.

Applications will be accepted via email at johnc@hickorylaw.com, by hand delivery to 858 2nd Street NE, Suite 200 in Hickory, or by mail. All mailed applications must be postmarked by the submittal deadline.

The City Attorney will distribute the letters of interest to Hickory City Council. City Council will then review and decide the next steps in the interview process once the applications are in hand. For additional information, contact City Attorney John Crone at 828-322-4663.