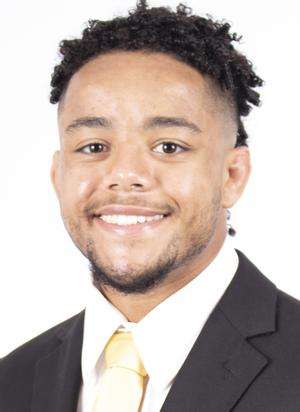 Matching his finishes from 2022 and 2020, Smith went 5-2 at McKenzie Arena with two losses to top-20 opponents. His takedown in a Sudden Victory overtime period produced a 7-5 win against 28th-ranked Braxton Brown of Maryland to clinch a top-six spot, and Smith rallied for a 5-4 win in the fifth-place match against 16th-ranked Stevo Poulin from Northern Colorado.

Poulin, an NC State transfer who had won 6-5 against Smith in a quarterfinal match Sunday, led 3-0 and increased his riding time to 1:25 on Monday before Smith got an escape with 1:20 left in third period.

Smith tied the match at 3-all on the scoreboard thanks to a takedown with 54 seconds left and stayed on top for 17 seconds to reduce Poulin’s riding time advantage to 1:08 before Poulin took a 4-3 lead with an escape. Smith delivered another takedown with 11 seconds left and maintained a front headlock until time ran out with no escape awarded.

The lack of escape, plus Poulin’s riding time going from 1:08 to under a minute at just 57 seconds, allowed Smith to record a 5-4 victory.

With App State’s wrestlers ranking among the national leaders in contested matches during the 2022 fall, plus an appearance at the Cliff Keen Las Vegas Invitational adding to an already challenging schedule, the Mountaineers took a different approach with how they arranged their entries for the Southern Scuffle and didn’t send all of their starters. App State’s 46.5 team points were the 13th-highest in the 21-team field.

Askey’s two losses were decisions against wrestlers ranked No. 2 and No. 20 in the country. He had 11 takedowns and one reversal in a tech fall against Duke’s Logan Ferrero to open the event and reached the quarterfinals with a 6-0 shutout of Oklahoma State’s Travis Mastrojiovannia. After a 7-2 loss to No. 2 Kendall Coleman of Purdue, Askey won a 16-4 major decision against Iowa State’s Andrew Huddleston. He followed a 7-4 loss to No. 20 Daniel Cardenas of Stanford by taking the seventh-place match via a medical forfeit.

Bond and Miller both won three matches apiece to come within one win of medaling, as Miller improved to 3-1 thanks to a 7-5 decision that concluded with a Sudden Victory takedown of Virginia’s Hudson Stewart. Formato won his first two matches to also reach the final 12, and Floyd made it there with two wins, including a 3-1 decision that ended with a Sudden Victory takedown of Chattanooga’s Jake Boyd.

All told, App State wrestlers were involved in 22 matches against ranked opponents.