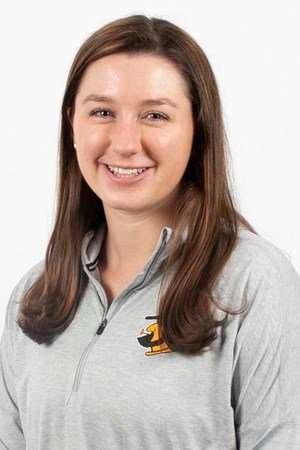 Brooke Gruber was named a ITA Scholar-Athlete, earning a cumulative GPA of 3.94 and a perfect 4.0 in the spring 2022 semester.
photo courtesy of Appalachian State Athletics

App State tennis was named an Intercollegiate Tennis Association (ITA) All-Academic Team for the fifth straight year, posting a solid GPA of 3.22 for the 2021-22 academic year.

Brooke Gruber was named a 2022 ITA Scholar-Athlete for her impressive work in the classroom, earning a cumulative GPA of 3.94 and a perfect 4.0 in the spring 2022 semester after joining the team.

Gruber excelled both on and off the court in her first season as a Mountaineer, posting two singles wins and three doubles victories. In singles play, the freshman defeated her opponent from Lees-McRae 7-6, 6-4, and notched a conference victory over Coastal Carolina 6-3, 6-2. In doubles action, the Raleigh native earned three doubles victories alongside Olwyn Ryan-Bovey, defeating Lees-McRae 6-1, Louisiana 6-2 and Davidson 6-1.

The Mountaineers had notable league wins as a team, tallying two 4-0 shutouts against Texas State and ULM, and also defeated Louisiana 4-2.

To become an ITA Scholar-Athlete, one must have a grade point average of at least 3.5 (on a 4.0 scale) for the current academic year and have been enrolled at their present school for at least two semesters (including freshman through senior year). Programs that were recognized as ITA All-Academic Teams must have posted a team GPA of at least 3.2 (on a 4.0 scale).