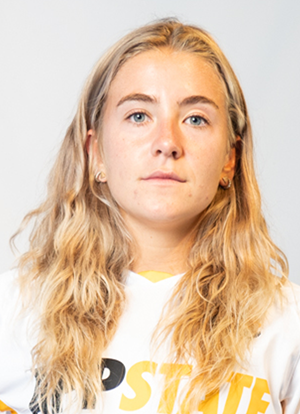 Skyler Walk had one of the two shots for the Mountaineers.
photo courtesy of Appalachian State Athletics

After waiting out a 2:50 pregame weather delay, App State women’s soccer suffered its first setback of the season, falling 3-0 to Clemson at Historic Riggs Field, Sunday.

The loss snaps the Mountaineers four-match unbeaten streak to begin the season. Senior goalkeeper Kerry Eagleston made a season-high 13 saves, including eight in the opening half of play.

The Mountaineers (1-1-3) were held to just two shots in the contest, one each from Shannon Studer and Skyler Walk. 19 different Mountaineers saw playing time in the match.

Clemson (3-1-2) got on the board in the 33rd minute when they were able to capitalize on a corner kick, taking a 1-0 lead into halftime.

The Tigers added a pair of goals in the second half, both coming off of rebounds, the first on a blocked shot in the 50th minute, and the final tally coming off a saved penalty kick by Eagleston, on which App State was unable to clear the rebound.

App State will be back at home Thursday as they face ETSU at Ted Mackorell Soccer Complex, with first touch slated for 7 p.m. It’s the Mountaineers Pediatric Cancer Awareness game, and the team will be sporting gold laces in support of the cause.