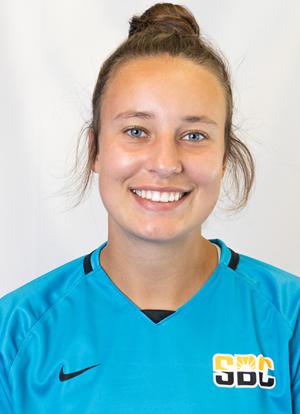 Kerry Eagleston had her third clean sheet out of the first four games to open the season.
photo courtesy of Appalachian State Athletics

On an evening that began with a senior day celebration, senior goalkeeper Kerry Eagleston led a gritty defensive effort for the Mountaineers, as App State and Liberty battled to a scoreless draw at Ted Mackorell Soccer Complex, Thursday.

Eagleston recorded her 13th career shutout, moving her into sole possession of fourth all-time for clean sheets in Mountaineer history. She ended the night with three saves.

Twenty different Mountaineers saw action on opening night, led by sophomore defender Skyler Walk who was the lone Mountaineer to play all 90 minutes along a back line that yielded only three shots on net despite 18 shot attempts by the Flames.

Senior Emma McGibany got off the best offensive chance for the Mountaineers, ripping a shot from the top of the box midway through the first half which was saved by the Flames. App State also produced a scoring chance midway through the second half, when Izzi Wood missed a shot just over the crossbar on a service from Stephanie Barbosa on a free kick. Wood led the Mountaineers with two shots, after missing the 2021 season due to injury.

Freshman Lela Stark also tallied a shot on goal with 13 minutes to play in regulation.

The Mountaineers will take to the road for the first time in 2022 Sunday, when they travel to Spartanburg, S.C. to take on the USC Upstate Spartans, at 5 p.m.