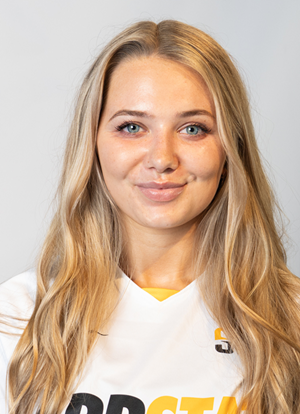 Breckyn Monteith scored a goal for App despite the loss.
photo courtesy of Appalachian State Athletics

App State scored a pair of goals in less than a two-minute span in the second half, but Marshall scored with less than four minutes to play, and the Mountaineers fell, 3-2, dropping their first match in Sun Belt play.

Trailing 2-0 after 56 minutes of play, App State (3-4-4, 2-1-0) began their comeback, with Katie Fuller scoring her first goal of the year in the 59th minute. The tally came off a corner kick service from Stephanie Barbosa, and Fuller used her body to juggle the ball into the back of the net.

Just 108 seconds later, Breckyn Monteith received a pass near the top of the Marshall box, and was able to turn past her defender and bury a strike into the bottom left corner to tie the score at 2-2. Barbosa picked up the assist on the play.

Shortly thereafter, App State went up a player, as Marshall’s Cassidy Bell was sent off in the 64th minute following her second yellow card of the match.

Junior goalkeeper Jazz Salters, who replaced starting goalkeeper Kerry Eagleston in the 59th minute following Fuller’s goal, made a pair of outstanding saves late to keep the match knotted at 2-2. However, with just under four minutes to play, Herd forward Morgan White was able to beat Salters up high for her second goal of the match.

After being held to just one shot in the opening half, the Mountaineers responded with eight shots in the second stanza, including five on target. Izzi Wood led the way with three shots, all on target, for the Mountaineers.

App State will be back on the road on Friday, as they travel to James Madison for their second all-time meeting with the Dukes, and first as members of the Sun Belt conference. Kickoff in Harrisonburg is slated for 6 p.m.