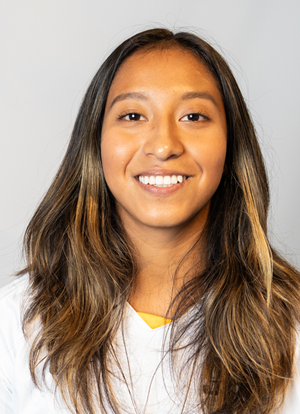 Stephanie Barbosa scored the lone goal of the contest for the Mountaineers.
photo courtesy of Appalachian State Athletics

App State sophomore Stephanie Barbosa headed a ball into the back of the net to tie the score at 1-1 in the opening half, but the College of Charleston delivered the final blow moments later, and the Mountaineers fell, 2-1, Sunday.

Barbosa was set up by freshman Shannon Studer who delivered a long-range cross into the box. Barbosa read the pass well, timed the bounce, and headed it over the fingertips of goalkeeper Katie Carrino in the 29th minute.

The Cougars scored the game-winning goal just four minutes later, as Jenna Snead was able to tally her first of the season to regain the lead before halftime.

App State finished the contest with 12 shots, including six on goal, led by Anna Kate Highsmith who came off the bench to put all three of her shots on target. Studer, Izzi Wood, and Lela Stark each finished with two shots apiece.

While goalkeeper Kerry Eagleston tallied only two saves on the afternoon, both were diving efforts in threatening areas.

The Cougars jumped on the board just 16 minutes in when Grace Powell netted her sixth goal of the season on a cross in front of the goal mouth.

App State closes out non-conference play, Thursday, as they host the Radford Highlanders at 7 p.m. The Mountaineers will host Pups on the Pitch, and the first 100 fans who bring their dogs to Ted Mackorell Soccer Complex will receive a dog tag for their pup and a matching dog tag for themselves. The match will be broadcast on ESPN+.