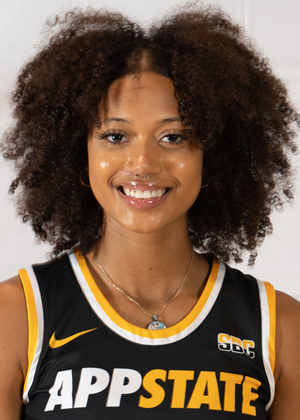 Despite the loss, graduate transfer Lauren Carter and freshman Chaé Harris made strong debuts for the Mountaineers.

Carter set a single-game career high of 25 points, sinking 6-of-8 shots from behind the 3-point line, which is also single-game high for the High Point, N.C., native who previously played at Campbell and Morehead State. In her collegiate debut, Harris dropped in 22 points and went 5-of-6 from the charity stripe. She also made a team-high seven rebounds on the night.

“Obviously I’m really proud of our team and the way that we battled with adversity, even before the game, just having some players out, coming ready to play and really playing three quarters of really good basketball,” said head coach Angel Elderkin. “The fourth quarter we were not ourselves. Obviously Charlotte had a lot to do with that, but we still continued to battle. We still continued to fight.”

After four quarters of regulation, the score was knotted at 74-74. App State battled throughout the first overtime period, with sophomore Emily Carver sinking crucial free throws, graduate student Brooke Bigott making a layup and earning the and-1, and Harris making back-to-back layups to send the game to a second overtime at 85-85.

A jumper from Harris gave the Mountaineers a slight edge over the 49ers to start the second OT period. Free throws from Charlotte’s Mikayla Boykin put the 49ers up 90-89. Another jumper from Carver put App State up 91-90, but Boykin returned to the line to return the lead to the home team at 92-91. Carter made a layup through contact, got fouled and made the ensuing free throw to put App State up again 94-92, but Charlotte followed with six unanswered points to secure the home win.

The Mountaineers were perfect from the free-throw line in the fourth quarter and through both overtime periods and shot 75 percent from the line for the entirety of the game. App State tallied 28 points off the bench, including Harris’ 22.

Redshirt senior Janay Sanders and Carver also finished in double figures for the Mountaineers with 17 and 15 points, respectively.

App State took a 20-15 lead in the first quarter and continued to build off its lead in the second quarter, going into halftime with a 39-28 advantage over the 49ers.

At the end of the third quarter, App State had a 67-48 lead, but Charlotte managed the comeback to send it to overtime. Boykin and Dazia Lawrence led the 49ers with 30 and 29 points, respectively.

App State heads to Richmond, Ky., to take on EKU on Friday at 7 p.m. The game will be broadcasted on ESPN+.